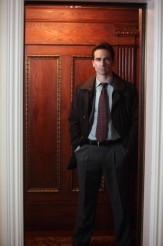 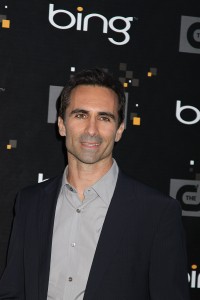 In the CW’s freshman series RINGER, which airs Tuesdays at 9 PM, Sarah Michelle Gellar stars as twin sisters Bridget and Siobhan. Wealthy Siobhan invited Bridget to New York, then faked her own death. Bridget has adopted Siobhan’s identity, partly to get away from Victor Machado, the determined FBI agent played by Nestor Carbonell, as Victor wants Bridget to testify against a homicidal mob boss.

Back in 2004, Carbonell starred with future RINGER colleague Ioan Gruffudd in the short-lived legal drama CENTURY CITY. The New York-born actor has also been a series regular on SUDDENLY SUSAN and THE TICK, but he’s probably best known to television audiences as the nearly immortal Richard Alpert on LOST. Filmgoers recognize him as the Mayor in the Batman DARK KNIGHT films.

While RINGER doesn’t have LOST’s science fiction/supernatural underpinnings, it shares similarly elaborate storytelling. At a party thrown by the CW for the press, Carbonell talks about portraying his characters on both series.

ASSIGNMENT X: At the time you were offered RINGER, were you looking for another series after LOST or were you planning to do movies?

CARBONELL: I always look around for just good material. TV, now more than ever, is obviously great writing, great storytelling. There’s so much of it in TV now. I picked up the script, I fell in love with the story. I loved the thriller element of it, I loved the serialized element of it and I was drawn to it. But for me, it’s not about what medium it’s in, it’s really about the script.

AX: RINGER has a somewhat unconventional production history, in that it was developed at CBS and then moved over to its sibling network the CW …

CARBONELL: This is really unusual for them. We wound up on the CW, which I think is a fine thing. But I was really encouraged to see that they were doing that. 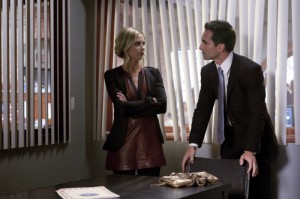 AX: How much did you know about your RINGER character at the outset?

CARBONELL: I [didn’t] even know my own back story. The writers [didn’t] want to tell me. I suppose I could get something out of them, but I [was] kind of enjoying not knowing too much. I got so used to that on LOST and even on THE DARK KNIGHT, doing my bit there. I was enjoying it, because I don’t want to judge him one way or the other. I just know that he’s driven to do something with this dogged determination he has to put this man away and to chase this girl Bridget to help him do it. I [didn’t] know his motivation, but I’m enjoying having him enjoy it. If he’s enjoying it, I’m enjoying it. I think the scripts speak for themselves once you get them. We don’t know anything beyond the script, but I’m comfortable with that.

Having worked on LOST, I get that vibe. I’m on a sort of need to know basis and I think for the most part, all of us are, obviously with the exception of Sarah Michelle, who’s producing, but I like it like that. The great thing about the show is that even as we’re dealing with a big mystery and they’re teasing things as we go along, they’re also paying them off week to week. So we’re getting some nice payoffs.

AX: Is there anybody difference in playing somebody like Victor Machado, where you don’t know the secrets but you have at least an idea of what the range of secrets could be, versus playing Richard Alpert in LOST, where not only did you not only not know the secrets, but you could turn out to not be human or a ghost or some other surprising entity?

CARBONELL: Well, I think even when you don’t know the outcome or the reasons, as an actor, it’s your job to invent them. I was always wrong on LOST, but I committed to what I invented.

AX: What did you think Richard’s story was?

CARBONELL: I thought [Richard’s connection to the bio-science company] was real. When I’m introduced in Juliet’s [Elizabeth Mitchell] back story as a man recruiting her, I thought for the longest time, “Yeah, I’m part of this corporation and I’m involved in bioscience.” I had no idea that I was going to be [virtually immortal]. I mean, the stakes were enormously high on LOST and the parameters were incredible. It remains to be seen what the parameters on this one will be. I think it’s safe to say we’re not going into paranormal territory – at least not yet [laughs]. But I wouldn’t be surprised if this man has some really dark stuff in his past. I think that it’s any actor’s dream to get to play the stakes that we got to play on LOST. Having said that, yeah, there’s something to be said for getting to play something in a really grounded, gritty way. 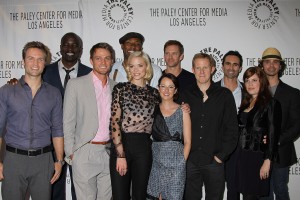 AX: On LOST, Richard started as almost phlegmatic, and became progressively exasperated. What can you tell us about Victor’s arc on RINGER so far?

CARBONELL: I think maybe we’re in the same trajectory. He’s a bit unflappable initially, we think. But he’s pretty driven. So I imagine if he doesn’t get what he wants pretty soon that maybe his wheels will go pop. I don’t think that he knows the obvious, which is that [Bridget is] just hiding in plain sight as her sister. I think he knows that she’s full of it, but she is certainly a match for him, and I think he’s enjoying that whole cat and mouse process.

AX: Does Victor have any passions besides trying to get to the bottom of things?

CARBONELL: Women! [laughs] I’m just joking, I don’t know. It’s weird. I think he’s fond of Siobhan, who really is Bridget, as he was of Bridget when he met her, but his passion right now, his m.o., is really just trying to crack this case.

AX: Does working in Los Angeles, as you are on RINGER, have a different vibe than working in Hawaii?

CARBONELL: Oh, a tremendously different vibe. Oahu was perfect, specifically for LOST. It was incredible. We were able to shoot – and this is all credit to the production team – ninety-nine percent of LOST was shot on Oahu, including scenes from South Korea, Iraq, Tunisia, London, you name it, it was shot there – and obviously, where else are you going to get all of those elements and an incredible jungle to shoot in?

AX: When LOST started, it wasn’t evident before it started that it would turn into the cult hit it became. RINGER has a little bit of a cult aspect going in, because the actors all have followings, especially Sarah Michelle Gellar, who of course starred in BUFFY THE VAMPIRE SLAYER.

CARBONELL: Sarah Michelle Gellar – she’s a force of nature. She’s got an enormous loyal following and it’s tremendous. I don’t think they’ll be disappointed with this show. It certainly delivers in the thriller elements and you get plenty of Sarah Michelle.

AX: How is it working with Sarah Michelle Gellar as both your fellow actor and as one of your producers on RINGER?

CARBONELL: We’re so incredibly lucky, all of us, to be a part of this, and to have Sarah Michelle basically at the helm, taking on two roles, which really are four, when she’s playing [the sisters in the back stories] – or at least three [Bridget, Siobhan, Bridget pretending to be Siobhan]. Well, four when you count her as producer, and then five as mother and six as wife. She’s got a lot of hats on. It’s crazy and I couldn’t think of anybody more equipped to do all that than Sarah Michelle. She’s amazing. She’s set a beautiful tone on the set, she’s extremely bright, and she’s got a tremendous temperament and a great work ethic, and it’s a really great group of people. I don’t know if you’ve met [RINGER creators Eric C. Charmelo and Nicole Snyder], but they’re not only incredibly talented, they’re so approachable, they’re sweet as can be. So really, it’s a great bunch.

AX: Is there anything different about being on something that has a cult following that either develops, like LOST, or walks in the door with it, like RINGER?

CARBONELL: Yeah. I mean, there’s nothing like a loyal base that watches you religiously week in and week out. That’s what we live off of. Without that, we’d have nothing, we’d just be performing in a vacuum. So I was thrilled with the loyal fan base that we had on LOST. We had the most amazing fans – really bright, obviously very faithful to the show. So it was something great to share with people who really watched the show so religiously.

CARBONELL: I finished my part on THE DARK KNIGHT RISES, reprised the role of the Mayor that I got to play in DARK KNIGHT, so that was a lot of fun to be going back and working with [director] Chris Nolan and the whole gang back in England. It was beautiful. It was just great to go back and revisit that role and obviously work with an amazing storyteller, Chris Nolan.

AX: Working in two Batman films, are you a comic book fan at all?

CARBONELL: I am now [laughs]! I did a show called THE TICK [created by Ben Edlund] years ago. I did the live-action version of a cartoon. I got to play a character named Batmanuel. It wasn’t quite Batman, but it was obviously a takeoff on that. So I think since that, I’ve definitely become a little bit of a comic book guy, and now that I have two young boys who are getting into that, even more so.

AX: If your sons are comic book fans, are they happy that Dad’s in these cool DARK KNIGHT movies?

CARBONELL: They haven’t seen the first one, because they’re still a little too young, six and nine. I think maybe next year I’ll let them watch DARK KNIGHT. They’re a little on the young side. It’s a tough movie.

AX: Is there anything you’d like to say about RINGER?

CARBONELL: I’m just really, really excited. You know what it is? I’m getting a very similar feeling now as I’m reading each episode that I did working on LOST, in that I can’t wait to read the next one. It’s a tremendous conceit and a lovely psychological thriller and I’m eager to shoot the next one. I hope people stick with it and continue on with the thread, because I think it’s a really compelling series.

Click on Link: Exclusive Photos from THE CW PREMIERE Party presented by Bing!