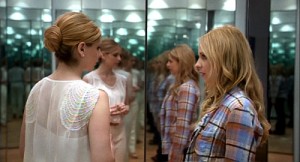 RINGER fulfills the first duty of a nighttime soap opera, which is to make the viewer curious about the reasons for what’s happening and about what will happen next. Eric Charmelo & Nicole Snyder have created a series with potential and a likeable leading actress – that would be Sarah Michelle Gellar. Gellar has been much missed by her TV fans since her days on and as BUFFY THE VAMPIRE SLAYER. Sure, she’s done movies during and since then, but most of them haven’t shown Gellar off to especially good advantage, and in any case, they didn’t present her on a weekly basis.

In RINGER, Gellar plays two roles. The one we spend most of our time with, at least for now, is Bridget Cafferty, an ex-addict/prostitute/stripper who is a witness in a Federal murder investigation. Afraid for her life, Bridget slips away from her FBI handlers to her identical twin sister Siobhan inEast Hampton,NY. Siobhan has been married for the last few years to the wealthy Andrew Martin (Ioan Gruffudd). Although Siobhan professes happiness to see Bridget again for the first time in six years and forgives her for some as-yet-unrevealed transgression, has not mentioned to anyone that she has a sister. The two women go for a motorboat ride. Bridget takes a nap – when she awakens, Siobhan is gone. Bridget assumes Siobhan drowned (anyone who has seen the trailer for the series premiere knows better) and, not knowing what else to do, steps into her sister’s life.

Well, of course that’s what anyone would do – provided she was the main character on a soap opera, of course. That’s a big leap, as is Bridget’s inability to speak softly when being overheard by a person on the other side of the room is likely to cause lots of problems. Ah, well, that’s the nature of the beast.

Whether or not one likes RINGER depends mostly on affinity for the genre. As nighttime soaps go, it seems good enough, with an old affair, a potential affair and the possibility of unknowing adultery between Bridget and Andrew, who doesn’t realize that the reason his wife is suddenly and surprisingly being so agreeable is that she’s really his sister-in-law.

Strangely, Gellar – who did a fine job in multiple roles on BUFFY as not only the leading lady but Faith (Eliza Dushku) in Buffy’s body, the Buffybot and the epitome of ancient evil, to name a few – doesn’t seem to do much to differentiate Bridget and Siobhan. Scenes where the two appear together (via some not-quite-right CGI) don’t make us feel like we’re watching two different people. Gellar is very likable as Bridget, and the actress’ desire to avoid camping it up as Siobhan is admirable, but she hasn’t come up with anything, at least in the pilot, that really distinguishes one woman from the other.

There’s some intrigue with Nestor Carbonell’s FBI agent, who may be up to no good (the matter of why Bridget suddenly felt the need to overpower her bodyguard and flee is one of the pilot’s more intriguing issues), and Gruffudd is stalwart as a fellow who can’t quite believe that his bad marriage is turning good again.

RINGER doesn’t have the over-the-top swoony hysteria (at least, not yet) of the kinds of soaps that people like to watch because they resemble fever dreams. It’s a serial set in a moneyed world full of attractive people with all sorts of secrets and a relatively earnest tone. If that sounds appealing, that’s what RINGER is.