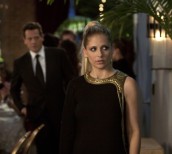 B) As much as it’s commendable that Gellar wants to do something that’s not BUFFY THE VAMPIRE SLAYER, picking a project where she’s not allowed to kick-ass and take names is incredibly hard to get used to. She works overtime to ensure this ridiculous concept works, but the writing is not as sharp or crisp as it should.

C) Did I mention the show isn’t very good.

The second week in and “She’s Ruining Everything” finds former drug addict/stripper/key witness in murder trial Bridget (Gellar) taking over the life of her sister Siobhan – a rich bitch who faked her own death and planned on killing her sister in the process so she could disappear.

Oh yes, it’s confusing. Not surprising, Bridget is better at being Siobhan than being herself which is a good thing for many people around her. Of course, she spends part of the episode hiding the self-defense murder of a hitman from the “Pilot” that the real Siobhan hired to knock her off.

There’s tons of duplicity on the show, but it’s all rather annoying. There’s another cocktail party or something. There’s the FBI agent (Nestor Carbonell) that wants to find Bridget and harasses Siobhan, who he thinks is Siobhan into revealing her sister’s whereabouts. My head is spinning – and not in a good way.

There’s mystery money in a secret account, there’s bad acting galore and there’s literally no suspense or thrillers. RINGER is an insufferable show that desperately wants to be a clever soapy thriller, but ends up just being soggy and wet.

Gellar deserves so much more than this material. After years of being given witty Joss Whedon lines, it’s just horrifying to watch her read subpar material. Plus, she was born to kick-ass. Yes, as an actor you don’t want to be stereotyped, but really, in her case, she should have found something a little stronger or just do a sitcom instead.

RINGER isn’t the worst fall TV show on the air, but it isn’t the best either. It’s hard to imagine this show stretching beyond 13 into 22, let alone into future seasons unless some major twists are in store. There may be an audience for this, primarily people who never saw BUFFY and don’t know any better. For those of us who relished every moment of that Whedon classic, it’s sad reminder that not everyone is capable of snappy, witty and memorable dialogue, not to mention how to wrestle the best out their lead actress (and in this case, you have her playing to two roles that aren’t being properly exploited).