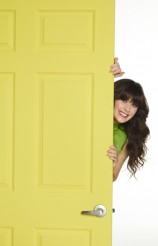 How one reacts to NEW GIRL depends in large part on how one reacts to its leading lady Zooey Deschanel. Deschanel (sister of BONES’ Emily Deschanel) is adorable in the way that kittens and bunnies are adorable. This is not to say there is anything infantile about her – Deschanel is bright and funny and sexy in a perfectly grown-up way – but she is playing a very specific kind of person here.

Assuming one has a favorable response to Deschanel’s character Jess Day, NEW GIRL is pretty amusing and agreeable. Jess, like several other leading lady’s in this fall’s new comedy series, needs a place to live after she discovers her boyfriend sharing his affections with another woman.

After searching for other living situations, Jess stumbles upon three male roommates (Max Greenfield, Jake Johnson, Damon Wayans, Jr. – after the pilot, Lamorne Morris takes over for Wayans’ in a different role, as Wayans found that his ABC sitcom HAPPY ENDINGS had been renewed for a second season) who are seeking a fourth, but decide to accommodate Jess when she says most of her friends are models. Jess is speaking the truth, but she is also prone to sobbing on the sofa, endlessly rewatching DIRTY DANCING and spontaneously singing about what’s going on in her mind. The fellows try to get her out of the apartment and set up on a date, but ride to her rescue when things go awry.

Deschanel is thoroughly appealing (again, if one is open to the type of appeal she puts forth here) and Greenfield, Johnson and Wayans all seem like people who actually have hung out together, as well as displaying adroit comic timing in their banter. The “douchebag jar” in the apartment, which each of them are required to contribute to whenever speech or behavior warrants it, is a nice touch (many of us can envision real-life situations where this could be helpful).

NEW GIRL doesn’t have a new premise – there are at least two other new sitcoms (2 BROKE GIRLS and APARTMENT 23) with similar notions – but it is well-acted and often prompts at least chuckles, if not laughs. It does appear to be trying to say something about male/female social relations, which is baloney unless one feels that Jess is an appropriate representative for her entire gender, but at least it isn’t unduly aggressive on the topic. More, while saying NEW GIRL has heart would be pushing it at this early stage, it does at least endorse compassion and human fellow-feeling, which is something of a relief amidst the bad behavior held up as entertainment elsewhere on the tube.