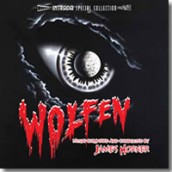 In the late 1970s and super early 1980s, James Horner had been clawing his way up from the low-budget likes of  THE LADY IN RED, HUMANOIDS FROM THE DEEP and BATTLE BEYOND THE STARS, giving 110% of his already formidable thematic talent to these enjoyable Roger Corman-produced flicks.

It was only a matter of time before Hollywood would notice, and 1981’s one-two Orion Picture horror punch of THE HAND and WOLFEN would deservedly take Horner into the big leagues- even if these two thrillers remain cult items. Smong soundtrack fans, they’ve also been two of James Horner’s most-requested releases. Now Intrada allows at least one to howl with still-startling power for an ersatz werewolf picture that packs proto-OWS politics on its mind.

Horner certainly had the animal in him for WOLFEN, unleashing snarling, gnarled percussion, with a furious spittle you could practically taste. Rarely has Horner been able to indulge in the kind of crazed, avant-garde musical gestures that he hoped would mark him for the concert hall before he transformed into a whole other composer. Yet as savage as the roaring impressionism of “Wolfen” might be, Horner’s soulful passages reveals them as ancient, noble beats with a righteous grudge against a coke-snorting real estate tycoon. Their kinship with American Indians also allows Horner to not only make WOLFEN a score of throat-ripping percussive power, but also one about the mystical, unconquered power of nature. It’s a pretty big musical, and cinematic idea to chew on, and Horner gnashes away with a score of startling complexity.

The paw prints that would take Horner to new, interstellar heights are all over this score, from the clanking percussive action and cosmic beam sound that soon sent the Enterprise into battle with Khan, as well as the shivering string effects that took a battalion of space marines into renewed combat with xenomorphs. WOLFEN marks the scent of future greatness to come, while being memorably frightening in its own right.