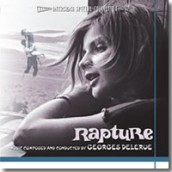 In the early 1960’s, Georges Delerue was well established in Europe for his delicately classical, and distinctly French approach to such dramas as THE SOFT SKIN and CONTEMPT. It was this poetic sound that finally took him to Hollywood by mid-decade, with one of his first English language scores ironically accompanying the French setting of 1965’s RAPTURE.

No longer obscure thanks to Intrada’s soundtrack release and the film’s accompanying DVD debut on Twilight Time, RAPTURE is a true revelation in Delerue’s resume of early masterworks. The composer’s voice is immediately recognizable in his use of harps, dulcimers and languid string melodies, music that might make one think they’re listening to a long-lost Bach chamber piece. But RAPTURE‘s weirder elements for a repressed Brittany girl who’s fallen head over heels for a scarecrow-come-to-life (actually Dean Stockwell’s escaped convict in scarecrow cloths) reveal themselves in eerie female voices and truly menacing orchestrations that signal the height of her lethal passion.

It’s music caught between true love and total psychosis, an unsettling atmosphere far more in tone with a period Euro-horror soundtrack than anything you’d expect from Francois Truffaut’s favored romanticist. In that entrancing regard, RAPTURE stands as one of Delerue’s most unique scores on either side of the pond, its equal footing in first love and creeping insanity distinctly described in Julie Kirgo’s liner notes.