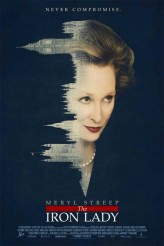 There are a number of reasons to see THE IRON LADY. Foremost, as one might expect, is Meryl Streep’s phenomenal performance as Margaret Thatcher, both at the peak of her power and in her later dementia. Streep doesn’t do an impersonation of the well-known public figure. Instead, she makes internal sense of every action shown here, whether she is cajoling the shade of her husband Denis (the very fine Jim Broadbent) or rousing the government to war. Were this a fictional story about a politician named, say, Peggy Hatcher, we would think the character a remarkable creation of Streep, writer Abi Morgan and director Phyllida Lloyd.

However, THE IRON LADY is, despite some unconventional aspects, a biography of Thatcher. It behooves audiences, especially reviewers, to simply experience the piece created by the filmmakers instead of complaining that something else wasn’t made altogether, but the title THE IRON LADY prompts certain expectations. What we get is a movie that has a good portion of its running time dealing with a once-formidable politician in decline and having vivid hallucinations of that her dead husband is alive and giving her advice, or else annoyed with her for not paying enough attention to him. So what we get is not what the relationship is actually like (even within the prism of the film), but what Thatcher’s now-confused mind perceives it to have been. It seems like it might have been more dramatically effective, as well as more economic to the narrative, to simply have shown more of the couple while Denis was still alive.

We also are shown Thatcher’s beginnings as the daughter (Alexandra Roach plays the young Maggie Roberts) of English shop owner/local politician Alfred Roberts, her meeting and marriage with the supportive Denis Thatcher (Harry Lloyd plays opposite Roach, as Broadbent does opposite Streep), her forceful ascent into Britain’s Conservative party, her tenure as the British Prime Minister (1979-1990) and what led to her decision not to fight for the re-election at the end of her final term.

That’s a lot of ground to cover, but the filmmakers make it harder on themselves by their generosity of coverage to Thatcher’s later years. Whatever one thinks of Thatcher, it seems a little intrusive to depict the particulars of dementia in a still-living person. On the flip side, anyone who knew nothing about Thatcher before seeing THE IRON LADY would get the impression that her political adversaries in the Labour Party objected to her policies out of their own sexism, not out of any deeply-held convictions.

Being ignorant of what was said in the room at the time, this reviewer cannot state categorically that, as depicted here, no one argued when then Prime Minister Thatcher compared Argentina invading the Falkland Islands (then a British territory, more recently peacefully taken back by Argentina) to the Japanese bombing Pearl Harbor. When, in 1990, Thatcher is challenged for leadership of the Conservative Party, IRON LADY depicts this as because her colleagues are noticing incipient dementia – again, not because her opponents hold differing views of what they’re trying to accomplish. Whether one views this as a character study, which appears to be the intention, or the biography of a major historical figure, which it is, the overall approach oversimplifies Thatcher’s challenges, as well as her impact on the world around her.

None of this detracts from the performances. Everyone is excellent, with Streep first among equals and Broadbent pitch-perfect. Standouts in the rest of the cast include Anthony Head (aka Anthony Stewart Head) as Thatcher’s loyal colleague Geoffrey Howe and Richard E. Grant as an unctuous Michael Haseltine. Roach is a perfect ‘40s/’50s heroine as the young Margaret and Lloyd is quite the charmer as the smitten young Denis.

Special mention should be made of age makeup designer Mark Coulier, whose transformation of Streep as Thatcher from middle aged to elderly is one of the most convincing ever accomplished for the screen. The film is worth seeing for Coulier’s work alone.

This said, THE IRON LADY is a strange mixture of speculative drama about the ravages of age and a kind of greatest hits reel of Thatcher’s public life. The two approaches do not enhance one another, despite the great work of the cast and Coulier’s makeup department. As a portrait of a once-powerful woman coping with loss of her faculties, it is sensitive, it is subtle, it is acute. As a portrait of one of the primary leaders of a Western government, it feels partisan (which is fair enough) and nonspecific, which is unfortunate.