Home » Exclusive Interview: Ioan Gruffudd gets the call for RINGER 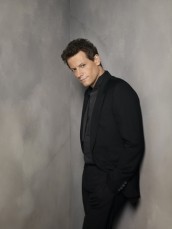 Exclusive Interview: Ioan Gruffudd gets the call for RINGER

The actor talks about his new CW series, plus the Spandex of the FANTASTIC FOUR movie franchise 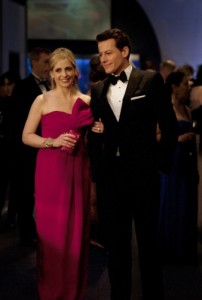 In the CW’s new series RINGER, premiering tonight at 9 PM, Sarah Michelle Gellar (of BUFFY THE VAMPIRE SLAYER) makes her long-awaited return to TV in a dual role. Gellar plays both the devious, wealthy Siobhan and her twin sister, downtrodden prostitute Bridget, who winds up assuming Siobhan’s identity.

Ioan Gruffudd  (pronounced YO-an GRUFF-uth) plays Siobhan’s husband Andrew, who has quite a few secrets of his own. The Welsh actor sprang to international fame as the title character in the remake of POLDARK and the HORATIO HORNBLOWER telefilms, and subsequently has worked often on both sides of the Atlantic. Genre fans know him as Reed Richards/Mr. Fantastic in the FANTASTIC FOUR films and as Lancelot in KING ARTHUR, and he essayed the British abolitionist William Wilberforce in AMAZING GRACE.

Gruffudd’s previous experience as a regular on a U.S. TV series was in the futuristic legal drama CENTURY CITY.  In this exclusive interview, Gruffudd sounds extremely happy to be working on RINGER, as well as intrigued that his Andrew unknowingly gets along better with the masquerading Bridget than he does with his actual wife.

IOAN GRUFFUDD: One of the twins has disappeared, so the other twin has assumed her life. We have to believe that he still thinks that this is his wife, but he can’t quite understand why [there is] this sudden change in character and mood and from being what we imagine is a very difficult relationship to now suddenly a relationship where they’re getting along. I think [Bridget is] slowly falling in love with my character, whereas the real wife hates him and is having an affair.

AX: Does Siobhan disappear as a consequence of the affair, or are we the audience investigating her disappearance?

GRUFFUDD: Well, we’re investigating her disappearance. I think that’s the beauty of the show is that you, the audience, are in on the secret from the get-go. And then we’ll start to answer questions and ask more questions as the show goes on. There are two different people, [one] trying to kill each sister.

AX: You’ve done a lot of feature films over the last several years. What made you decide that you wanted to come back to American TV?

GRUFFUDD: Well, it’s interesting. You would think that there would be many more opportunities in the film world, but they’re fewer and more far between now. I guess the new model for the studios is, they’re making these big tent-pole movies and less and less of those juicy little forty-million-dollar movies. It’s either an independent film made for next to nothing or these big tent-poles. Television is where I cut my teeth – HORNBLOWER and GREAT EXPECTATIONS and shows like that – so when I read this [RINGER], I fell in love with it. I felt it was very film noir-esque, lots of twists and turns, and a chance really to play a character that’s not necessarily all that he’s cut out to be on the surface. I think there’s a darker element to this guy that we can potentially explore. And that’s what attracted me to him, to play somebody who’s got a duplicitousness about him. [It’s also] opportunity to get a bit of security in my life, as well as doing the script.

AX: So Andrew has some secrets that we’ll be finding out as well?

GRUFFUDD: Exactly. What they are, I don’t really know at the moment, but they promise me that it’s going to be juicy and I’ll be doing things that I’ve never done before on film.

AX: Some people have asked whether the sisters have a current bond with one another, or if there’s animosity under the surface from the outset

GRUFFUDD: You see, this is the beauty of a show like this, is [people have] already thought something up that we haven’t thought of, [they’ve] seen something in it that isn’t necessarily there on the surface, and I think that’s going to be the exciting thing for us as viewers, is that we all have our own sort of ideas of where it’s going and we’ll be pleasantly surprised or disappointed or whatever. I don’t really know myself yet what the reason is behind my behavior towards [Bridget pretending to be Siobhan] at the beginning. Something has gone sour in our relationship for sure, and what that is, I don’t know, but it’s certainly fun to play, because now I’m a man who’s bemused by the fact that my wife is suddenly being nice towards me. And I’m sure – relationships are tough, they’re full of compromises and they work both ways, so I’m sure Andrew’s not a saint himself, but I don’t know why I’m not a saint yet.

AX: Now that you’re back doing series television, is it as you remembered it from last time?

GRUFFUDD: Yeah, incredibly long hours. I’d forgotten how intense it is. But I think that’s exciting, in a way. There’s so much pressure on creators and writers and networks now to satisfy the audience, because there are so many networks and so many good shows out there. Our show is elevated in a sense, because we have that thrilling aspect on a weekly basis. It’s not a long arc of one storyline. It’s several storylines, and we’ll have answers and questions and we’ll have answers and questions posed every episode. You’ll have some sort of answers or at least journeying towards an answer. There are some shows out there that take thirteen episodes to tell a whole story. So I think people are going to be satisfied. I don’t think they’re going to be disappointed. There will be so many characters and so many stories, I’m hoping they’ll drum up such excitement that in the end they’ll want the two sisters to discover what’s going on, and the other characters to discover it – especially my character. Will he ever discover that he’s not married to his wife?

GRUFFUDD: Yes, I am. This is the first time I’m getting a chance to play this sort of character. So I’m thrilled at that challenge as an actor.. Playing this sort of ambiguous character, I’m really, really enjoying it. I didn’t think I would. I thought I’d struggle with it, because of having played nice sort of all of my life, but I’m really enjoying discovering the darker aspects of myself [laughs].

AX: Having done some very high-profile sci-fi/fantasy projects and then some very straightforward projects, do you have a preference for one or the other?

GRUFFUDD: The one thing I love about film is that you have time to get things right. You can go over a thing again and again. In a scene in something like FANTASTIC FOUR, you have all the time in the world to get it right. With RINGER, the pace of it I enjoy also, although it’s slightly more terrifying than doing a film. I mean, there is no time in the day. We’re shooting an hour in eight days, where FANTASTIC FOUR was six months. Do you know what I mean? So it’s a bit of a transition for me to come back to that pace.

AX: Speaking of FANTASTIC FOUR, do you have any feelings about the reported reboot with a new cast?

GRUFFUDD: I had an amazing time doing those two films. Naturally, I feel a slight disappointment that I won’t be stepping into the shoes of Mr. Fantastic again, although there has been nothing official. Again, I think it is a rumor, but it feels true because we [Gruffudd and the other main cast] haven’t heard anything. I guess it makes sense of the studio to reboot it, because I guess you have a lot of longevity out of that franchise that they own.

AX: At least you probably won’t have to deal with that much Spandex in RINGER or other projects in the future?

GRUFFUDD: [laughs] I’ll tell you what, the Spandex was made a lot more comfortable by the fact that I had this incredible muscle suit that I was wearing underneath. I looked like the sculpture of David. Me in the Spandex without the muscle suit isn’t the most attractive thing in the world.

AX: Do you have any thoughts on how the public may respond to RINGER?

GRUFFUDD: No. It’s a very strange thing to be talking about a show that nobody has seen yet. Some people have seen the pilot and I think we’ve whetted people’s appetites. I just hope that people give it a chance, because there are so many instances of people wanting the spoilers, and let’s be honest, why do we tune in week in and week out? We want to be taken elsewhere. Why do we go to bed and read a new chapter of a novel? Because we want to be transported somewhere. I mean, I never want to know [ahead of time] what’s happening next week. Part of the thrill is discovering it at the same time as everybody else.

AX: But arguably, people often tune in because they want to watch certain elements, rather than just be surprised. HORNBLOWER sells on DVD, BUFFY sells on DVD, because some people like watching it over and over and over, even though they may know every single line.

GRUFFUDD: Fair enough. I guess in hindsight, you could say that. But in our circumstances, we don’t know necessarily what the show is going to be or how people are going to respond to it. But I think we’ve got a heightened sort of soap opera here. And that’s why we tune in week in and week out.

AX: RINGER has a little bit of a cult following aspect going in due to the cast, you and Sarah Michelle Gellar and Nestor Carbonell from LOST and Kristoffer Polaha from MAD MEN and LIFE UNEXPECTED. Does that built-in audience possibility affect how you approach this in any way or is that just something nice in the background?

GRUFFUDD: Well, it’s the thing that I’m hoping that will get us most of the audience coming in. They’re fans from the past coming to see her [Gellar] and I think the show itself is good enough to attract a genuine audience anyway, so I think we’ve got a great opportunity with her at the helm and her background and her supporters coming to watch, and my supporters, and Kris’s, and Nestor’s. I think there are plenty of elements in there to make this another success.