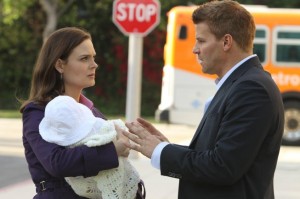 At the end of Season 7, a whole lot of bad was happening to the characters on the hit Fox series BONES. With Brennan (Emily Deschanel) and Booth (David Boreanaz) now in a relationship (and proud parents), a monkey wrench was thrown into the system where Brennan was framed for murder. At the end of the episode, she goes on the run as the team tries to clear her name.

At Comic-Con 2012, Boreanaz spoke to the press about where BONES  Season 8 will be headed.

“He’ll be interviewed by the Bureau and will have to answer questions about where Brennan might be,” says Boreanaz. “He’ll be distraught, desperate, angry and trying to figure out why she would do this.”

Boreanaz also adds that this will also put a little wedge in their relationship.

“He’ll have to re-examine the relationship and where they are and where it takes them,” says Boreanaz.

“Season 8 we see if we can bring everyone back together,” says Nathan. “Brennan is on the run, Booth is under FBI supervision and Cam [Tamara Taylor] is in the clear, but under tight surveillance. Everyone is extremely cooperative, but can’t do anything so they’re frustrated. People start to crack and it’s going to be about how they do the wrong thing and everything still turns out right.”

We also haven’t seen the last of villain Christopher Pelant (Andrew Leeds) who put everyone in the situation they’re in.

“He’s a villain you’ve never seen before,” explains Nathan. “He’s the guy your mom always said, ‘why can’t you be more like Chris,’ and the answer is, ‘because he’s a killer, mom.’”

BONES airs Monday nights in the fall on Fox

CD Review: DREAM HOUSE soundtrack
TV Review: BONES - Season 7 - “The Hot Dog in the Competition”
Exclusive Photos from MARVEL'S THOR: THE DARK WORLD U.S. Premiere
AGENTS OF SHIELD spinoff may be in the works on ABC