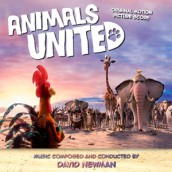 If there’s a musical king of the funny animal jungle, then David Newman can hold the title with the likes of ICE AGE, the SQUEAKQUEL to ALVIN AND THE CHIPMUNKS, two SCOOBY DOO flicks and DR. DOOLITTLE among the various CG and live-action creatures that have opened their mouths for a hip joke. That original language is German in KONFERENZ DER TIERE or ANIMALS UNITED as it’s known over here. But no matter if the dubbing’s in Deutsch or English, the wonderfully antic voice of Newman’s comedy music is loud and clear. While he’s capable of such relaxed scores as “Hoffa” and “Affair of the Necklace,” Newman’s most popular calling remains his talent for crazed, Carl Stalling-like stylings that hits every joke at roadrunner speed, effortlessly swinging in mid-stream to capture these pictures’ ADD humor.

Yet where lesser talents might end up with pure lunacy, leave it to a composer of Newman’s family pedigree to make this screwball stuff into actual music, full of beautifully performed melody. Admittedly you’ve got to have a lot of pep to follow him, especially as “Animals” leaps, crawls or hops along with the water-starved critters in the African savannah. Bringing in exotic percussion to sell the setting, Newman also goes beyond the military percussion of Team Animal and their hyper, human-baiting pratfalls to deliver some real emotion, whether his pro-environment message is expressed through a lush orchestra or tender piano, both of which are exceptionally well-performed by Berlin musicians. By the time they march on New York, “Animals United” delivers a thematically heartfelt musical scope that goes way beyond the expected cute stuff. It’s a score that’s as majestic as it is wild, with Perseverance Record’s American release of the album bringing even more of Newman’s score on board for the march.

Clink on the link to buy ANIMALS UNITED soundtrack