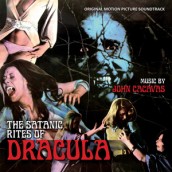 The Count gets deliciously groovy

Future KOJAK composer John Cacavas made a notable horror scoring debut aboard 1972’s HORROR EXPRESS, a classic thrill ride that combined mod rock stylings with an orchestral sensibility as old as a fire-eyed Siberian missing link. Cacavas applied an even groovier approach the next year to one of history’s greatest fiends, hearing him in service to an even more evil master as The Count tries to wipe out humanity with the bubonic plague.

These SATANIC RITES OF DRACULA would also turn out to be the swan song for Christopher Lee playing the Count at Hammer films, though his nemesis Peter Cushing would go at leat another round there as Van Helsing. Sure you might hear John Shaft as easily as you’d imagine Dracula, given Cacavas’ infectiously funkadelic talents. But the composer’s even cooler cape trick is bringing in such horror music tropes as an organ, bat-like string gestures and haunted house orchestrations into the ultra-70’s jam, music at once rooted in the classic thematic Hammer tradition as much as it’s in a with-it world that Dracula never made. And you can understand why he’d want to end it in this thoroughly fun combo of the truly scary and the swingingly Shagadelic, RITES that are given fun tribute by Randall D. Larson, a liner note version of Van Helsing if there ever was one.