CD Review: ANSWERS TO NOTHING soundtrack 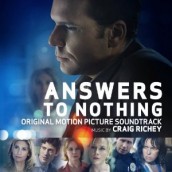 CD Review: ANSWERS TO NOTHING soundtrack

In such omnibus films as FRIENDS WITH MONEY, THE GYMNAST and KING OF KONG, Craig Richey’s proven he has a subtle, often dream-like way of musically getting into characters’ conflicted thoughts. It’s a talent that serves him well in the CRASH-like stories that make up ANSWERS TO NOTHING.

Richey hears an alternative sound for acoustical instruments, piano and troubled samples, conveying a tone of both understanding and apprehension at the missing person’s case that links the film’s disparate characters. Richey’s work is subtly mesmerizing, his mellow groove powerfully contrasting with the rock overload of Nico Vega. Her raw songs scream with the anguish that Richey captures at a whisper, both approaches working well to paint an evocative soundtrack for L.A.’s, inter-connected naked city.

Clink on the link to buy ANSWERS TO NOTHING soundtrack