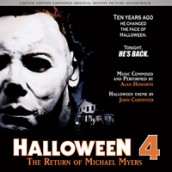 Some serial killers need a right hand knife, especially when they also happen to be the director and composer. Such was the assistance John Carpenter required after not only making HALLOWEEN. but also creating the most notorious, and toe-tapping theme in horror score history. That’s how sound designer-turned-composer Alan Howarth was brought into the series with HALLOWEEN 2 and given the “in association” credit for his teaming with Carpenter.

Skillfully abetting that film’s far more visceral shocks with eerie atmospheres and relentless rhythms, the collaborators next turned to computer-generated horror for the series SEASON OF THE WITCH. However, HALLOWEEN‘s most unique, and sadly under-appreciated non-Meyers entry required that it would be back to the basics for number 4. And while Carpenter had departed the series by that point, at least Howarth was left thankfully holding the blade, and keyboard for THE RETURN OF MICHAEL MEYERS.

Howarth certainly proved to be no copycat killer when it came time to generate his own percussive approach for the Michael, all while skillfully weaving Carpenter’s iconic themes to give fans the musical Shape they knew, love and expected. Now fully released via Buysoundtrax (with Howarth’s complete scores for 5 and 6 to hopefully follow), HALLOWEEN 4 is even more impressive for how Howarth gave Carpenter’s work a new, dread-inducing identity, from fog-like synths to its sharp, unstoppable beats and stinger attacks. Better yet, unlike so many of today’s sound design-driven horror scores, HALLOWEEN 4 has an uncluttered, melodic presence along with its shock effects, all making for a hypnotic listen that will definitely make you feel Carpenter is still in the room, albeit with a new twist of the synth knife.

Clink on the link to buy HALLOWEEN 4  soundtrack