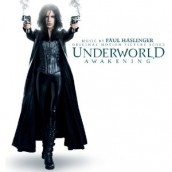 It’s time again to defrost ninja vampire warrior Selene from deep sequel freeze. And though Marco Beltrami gave her a more traditional orchestral horror score approach the last time out in UNDERWORLD: EVOLUTION, it’s certainly cool to welcome the series’ original composer Paul Haslinger back into the ongoing Lycan-bloodsucker feud, which gets joined by humans hell-bent on wiping both clans out for Selene’s future AWAKENING.

Going for a creepily ambient approach that reflected his Tangerine Dream roots in the first UNDERWORLD score, and then bringing an epic scope to the series’ impressive historical prequel RISE OF THE LYCANS, Haslinger goes for a bit of both qualities here to riveting effect. As always, percussion and ominous atmospheres are the key to the gun vs. claw appeal of the franchise’s present-day entries, music that makes one take a somewhat unwieldy, but always-fun mix of genres with undead seriousness. Haslinger’s mix of atmospheric samples, wild rhythmic action and a sinuous orchestra sounds better than ever, especially with eerie Middle Eastern winds and a hint of the first UNDERWORLD theme.

Haslinger gives compelling energy to AWAKENING, especially in this story’s emotional beats of Selene trying to find her long-lost daughter, a longed-for reunion hauntingly captured for piano and female voice. You can tell that this time it’s personal for her in AWAKENING, an empathy that gives the vampire-werewolf noir shenanigans a cool soul caught between icy control and blood-sucking, fur-flying savagery.