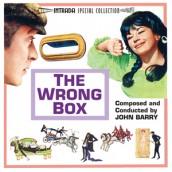 By 1966, John Barry was fully into the action swing of 007, the dark dramas of THE CHASE and KING RAT, as well as raising a female lion that would win him his first Oscar for BORN FREE. Far less known, but equally impressive was Barry’s talent for very British comedy, whether it was accompanying the jazzy woman chaser of THE KNACK or providing lethal gas for  THEY ALL DIED LAUGHING.

THE WRONG BOX provided Barry with another black-humored romp as the last surviving members of an aristocratic class wait to see who’ll be the last man standing, and inherit the money that will come along with the feat. Of course it’s a race to do them in, which Barry treats as a jaunty good time. The composer brings a waltzing sense of pomp and circumstance to these Victorians’ attempts to kill each other off, complete with drum rolls, a wealth of mock-classicisms and the composer’s inimitably lush sound. But if there’s one feeling that stands out in Barry’s repertoire, it’s soothing romance, which gets its work out here via Michael Caine’s ladykiller, with the score’s cuter antics relegated to the likes of Peter Sellers and Dudley Moore. Yet in the more suspenseful bits, it’s hard not to imaging Bond skulking about with composer’s suave sound.

Intrada brings this long-requested Barry rarity to CD in a single disc that combines the original stereo soundtrack with its unreleased cues in mono, though it’s hard to discern a difference in quality between the two. Droll English film aficionado Nick Redman is also on hand with liner notes that bring new appreciation to Barry’s lighter side, even in the company of an ever-increasing pile of corpses.

Clink on the link to buy THE WRONG BOX soundtrack