Home » Book Review: HOW TO BE DEATH 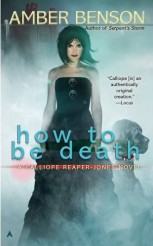 It’s less a holiday and more a murder mystery for Death in this enjoyable, atmospheric fantasy procedural starring Calliope Reaper-Jones

“I am Death” was the perfect line to conclude writer Amber Benson’s trilogy about Calliope Reaper-Jones. Callie, as her fans will recall, started as the title character in DEATH’S DAUGHTER, wanting the mundane life of a mortal but gradually accepting her supernatural destiny, including her job as the literal embodiment of Death.

However, there’s no reason to keep a good, lethal force of nature down, so Calliope is back in Book Four of the series, HOW TO BE DEATH, which is also the title of the tome our heroine is supposed to have. However, it turns out that a lot of other players in the supernatural universe want to get their hands on what should be Calliope’s property. When Calliope’s duties encompass hosting a function at the magnificentHauntedHeartsCastle, the book gets stolen. Thanks to a clause in the rules of the universe that render all immortals both mortal and without magic for twenty-four hours starting at midnight on Halloween, lives get taken as well. It’s up to Calliope, her faithful hellhound pal Runt and trusty assistant Jarvis – plus a few allies picked up along the way – to figure out who’s behind the mayhem, before Calliope loses her book, her job and maybe her very existence.

One of the ongoing pleasures of this series of novels is the way that Benson mixes a wide variety of different mythologies and makes them all fit together coherently within her universe. The writer allows all the different deities their spaces and habits without us ever worrying that they’ll contradict each other.

Part of the charm of this particular novel is the description of the surroundings. The ornate rooms and themed gardens of Haunted Hearts are presented in such loving, evocative detail that we want to go there ourselves (reportedly, the estate is patterned after Hearst Castle, but it’s changed enough to be its own realm). The attention to setting and atmosphere is reminiscent of the kind of detective tale that Agatha Christie might have set in an English village, except that we’re instead in an opulent, magical mansion with plenty of hot-tempered types.

Besides Calliope, returning characters from previous installments include loyal assistant Jarvis, protective hellhound Runt and easily irritated Hindu goddess Kali, plus a few others. This time around, Benson introduces an intriguingly ambiguous and very clever detective who knows his way around all manner of odd goings-on – the character seems primed for a spin-off of his own.

Callie is maturing as a character. She’s a lot more empathetic when it comes to the troubles of others, courtesy of all she’s learned from experience in the earlier tomes, yet she still maintains her conversational charm. It’s easy to imagine her as your pal, asking for your sympathetic ear as she recounts some singularly bizarre problems she’s having, which makes Callie continue to be a fine hostess for this mythic whodunit. In short, Calliope Reaper-Jones and HOW TO BE DEATH are good, original fun.

Related: Exclusive Interview with Amber Benson on HOW TO BE DEATH – Part 1

Source: Assignment X
Article: Book Review – HOW TO BE DEATH