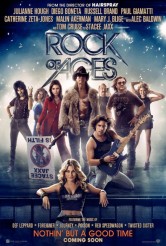 ROCK OF AGES the movie is adapted from ROCK OF AGES, the Broadway jukebox musical. A “jukebox musical,” for those unfamiliar with the term, is a show with a non-original score – in this instance, think MAMMA MIA!, but with Eighties rock and pop instead of ABBA songs.

This sort of set-up could go any which way the wind blows. In the case of ROCK OF AGES, what we get is a movie about a small-town girl and a city boy – yes, that is a reference to “Don’t Stop Believin’,” a song that we hear several times throughout the film – caught up in the big bad world of the Hollywood music scene. Despite the depiction of groupies, copious alcohol consumption, evil business management practices and some extras who look like they’ve danced out of ROCKY HORROR PICTURE SHOW, ROCK OF AGES has at heart an innocent optimism that makes HAIRSPRAY look cynical by comparison.

Not incidentally, the film ROCK OF AGES, like the film HAIRSPRAY, is directed by Adam Shankman, a former choreographer who seems to take special delight in showcasing the considerable terpsichorean talents of the leading ladies here, especially Julianne Hough as ingénue Sherrie Christian and Catherine Zeta-Jones as the vengefully censorious Patricia Whitmore.

Not having seen the stage version but simply comparing the lists of character names, it would seen that the screenplay by Justin Theroux and original Broadway scripter Chris D’Arienzo and Allan Loeb has gone through some changes in its journey from one medium to another. It’s still the Eighties, though. Here Hough’s Sherrie gets off the (singing) bus to Los Angeles, hoping to start a career as a singer. She almost immediately meets Drew Boley (Diego Boneta), an aspiring rocker who works as a busboy at the famed Bourbon Room on the Sunset Strip. It’s love at first sight. Drew promptly gets Sherrie a waitress job at the Bourbon, where rock-loving manager Dennis (Alec Baldwin) is constantly worried about the night’s receipts, but buoyed up by his loyal assistant Lonny (Russell Brand).

Other concerns for the Bourbon Room include self-styled moral crusader Patricia Whitmore, whose husband is the mayor (Bryan Cranston). An intimate concert by the legendary band Arsenal before its frontman Stacee Jaxx (Tom Cruise) goes his own way is meant to buoy up the fortunes of the Bourbon. There are misunderstandings, betrayals, reconciliations galore and rock and pop anthems every few seconds.

“Don’t Stop Believin’” has taken on a renewed life of its own by now, but somehow that resonance simply helps sell its use here (one of ROCK’s deadpan jokes is that this is a composition by our hero Drew). Although one is a song and the other a human being, there’s a certain similarity between “Don’t Stop Believin’” and actor Cruise, at least in the way the two are employed. Cruise is such an iconic figure that it’s easy to buy him as the movie’s biggest cultural icon. Cruise sings credibly – he’s as good as a lot of the guys Stacee stands in for – but what’s surprising is the wary soul he brings to the part. Rather than being outrageously larger than life, Cruise’s Stacee seems to honestly be wondering where he is, how he got here and if anybody can help him get back to where he wants to be.

Hough is a winsome, likable heroine with a voice well-suited for ballads and anthems, as well as assured dance technique – when Sherrie breaks into a routine, Hough makes it look as easy as walking. With his puppy-dog eyes and warm sincerity, Boneta is easily appealing and seems like he could have stepped out of either a music video or a movie of the Eighties.

Zeta-Jones pulls off some high kicks in a cumbersome costume as the repressed-to-the-point-of-mania Patricia, reminding us of her CHICAGO days.Baldwin seems a little bemused, but he looks the part of a rock ‘n’ roll survivor who has been around since the early days. His musical numbers with Brand are unforgettable – not that they’re the best covers you’ve ever heard, but it’s pretty much guaranteed that at least one will burn itself into your memory. Giamatti plays Stacee’s slimy manager with relish and gets to belt out part of a tune with zeal, Malin Akerman is game for her role as a crusading rock reporter and Mary J. Blige occasionally brings the roof down vocally as a strip club proprietor.Cranston doesn’t sing, but he’s reliably funny as the mayor.

There is a sense of real fun here, whether it’s a mashup of “Jukebox Hero” (as Sherrie and Drew sing about their hopes) and “I Love Rock ‘n Roll” (as Dennis and Lonny state why they’re still at the Bourbon Club), Drew shyly playing his half-finished composition for Sherrie or an unexpectedly literal rendition of “I Want To Know What Love Is.” ROCK OF AGES probably won’t blow too many people’s minds, but it still makes us want to sing along much of the time, and the tone is just right, kind without being preachy, humorous without being overly facetious. As the ads and the song say, it’s nothin’ but a good time.

Related: Exclusive Photos from the ROCK OF AGES world premiere