Blu-ray Review: THE WOMAN IN BLACK 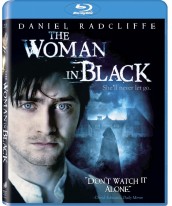 Blu-ray Review: THE WOMAN IN BLACK

It’s hard to craft an old fashioned ghost story in a world where found footage films seem to be the only thing pulling horror fans into theaters.

Thank goodness for THE WOMAN IN BLACK, the latest attempt at the classic Hammer Films label to bring back the vibe and tone of their 1960s heyday.

They’ve found great material with the James Goldman script based on the novel by Susan Hill. It’s set in Victorian-era England and follows a man named Arthur Kipps (Daniel Radcliffe) who is still haunted by the death of his wife and decides to take on an assignment to get the estate in order for a woman in a small village of Crythin Gifford.

There’s ghost problems though – the previous owner is a mysterious ghostly woman who has been known to take the lives of children in the village if you see her.

The real find here though is Radcliffe who does a great job of shedding his Harry Potter innocence and tackles his first major adult role. He’s quite good and he knows how to sell fantastical material.

The only mis-step in the film is the somewhat unsatisfying ending, but that’s a small quibble when everything else is so good.

For a PG-13 film, this movie is high on suspense and delivers taut tension and a slowly unraveling mystery with the proper tone and pace.

The Blu-ray offers up a pristine image while the special features include director/screenwriter commentary, a featurette on the making of the film and one on Daniel Radcliffe.

Like last year’s INSIDIOUS, THE WOMAN IN BLACK doesn’t rely on cheap scares, shaky-cam footage and over-the-top gore. It’s a simple ghost story that tells it’s story well and restores some of the prestige back to the Hammer Film label. I can’t wait to see what the company does next since they’ve set the bar high with this film.

Related Link: CD Review of THE WOMAN IN BLACK soundtrack