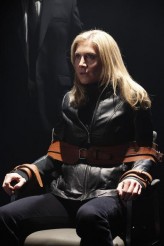 WonderCon 2011: Elizabeth Mitchell on Erica in V Season 3 … if there is a Season 3 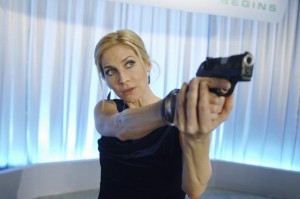 If there is a Season 3 of V, where does Elizabeth Mitchell see her FBI character of Erica going? Will she be a kick-ass, take no prisoners type of character given that everyone she has loved is now gone? Talking with us at WonderCon 2011 in San Francisco, this is what she had to say.

“Yes, I would like her to be a nothing to lose, incredibly strong, incredibly intelligent character,” Mitchell says. “I feel that maybe we can out think them [the aliens\. We are talking about the reptilian brain, which is mostly just instinct. So with a combination that we have and so many gifts and so many things we can do. I think that Erica is capable of it. I just want to see it happen. And I want there to be so much action, I want Marc [Singer]’s character to send her out to accomplish things. That would be wonderful. That would be very cool.”

Mitchell jokes that it would also be cool if Erica would get some sort of scientific enhancement to fight the Visitors.

So does Mitchell see the show evolving into where Singer’s character and Erica are the head of the resistance?