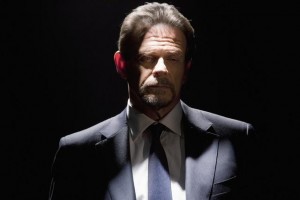 In ABC’s series V, which has its season finale this Tuesday at 9 PM, the alien Visitors trying to take over Earth are challenged on screen in their rampage by the heroic Fifth Column.

Behind the scenes, executive producer Steve Pearlman, the production team member who supervises filming in Vancouver, stands up for the forces of budget, schedule and special effects. He talks to us about some of the complications of making the otherworldly aspects of the show look good, and also hints at what’s to come.

ASSIGNMENT X: What do the Visitors do when they reach a new planet?

STEVE PEARLMAN: They take the best features of every place where they’ve been, meaning they’ve been traveling around inter-galactically, from planet to planet, and taking the best of what each planet has to offer. It’s about their own survival. The human soul, which is something that we explore a lot this season, is something that is unique to humans that they haven’t found anywhere else in their travels around the galaxy. Anna [Morena Baccarin] starts to realize that there’s something to this thing called the human soul and she needs to pay attention to it.

PEARLMAN: That has not been a part of our conversations yet. We literally just cast Marc a week and a half before we started shooting. The process, much like when we cast Jane Badler [who, like Singer, was a regular in the 1984-1985 original V series] into the show, was not, “We need to write a part for Marc Singer.” The script had been written and it was a great character where we thought, “Wow, that would be interesting if we were to have Marc come in and read for that,” and he did. He came in and read for it and he was great. There was a lot of very positive fan reaction to our casting of Jane Badler. It made a lot of sense for us to cast him in this role. He was terrific, so we’re very happy that we brought him into the show and if we get picked up for a third season, there are a lot of places where we can go to explore that character.

AX: Since you’re on the ground in Vancouver running the show day to day, and most of the creative staff is back in L.A., can you envision working with this kind of set-up before the invention of Skype and the Internet?

PEARLMAN: Well, certainly a lot of shows were produced on distant location before the Internet. Years ago, I was an executive at Warner Bros.  and we had shows shooting in New York, we actually shot a pilot in Australia one year, so it’s not a totally new thing that shows would shoot out of town.

The thing that is unique on this show is the amount of visual effects work that we do, and just the technology in general. It’s enabled us to do so much more than what we were able to do even a few years ago. So to answer your question, the way we do produce V would be very challenging for us to do that without the Internet. Even editing – I edit all the shows over iChat, so I sit at my desk in Vancouver looking at my computer screen, and I’m watching the Avid in Burbank live as the editor is cutting the show. [There is] a video output of the Avid [editing computer] that goes into iChat and appears on my computer. Instead of seeing a person, I see the Avid.

After we lock a show, but before the visual effects are in, we have what we call a spotting session with me and our visual effects company Zoic. They’re in Culver City, and our editorial is in Burbank, so we do a three-way video chat and there’s another program that’s called Cinemascope that we’re on where we run the show and we can draw on the picture. So if we want to have sparks coming out of lightning, or we want to have the mothership or a shuttle traveling across the sky, any one of us who’s logged into this can literally draw on the screen and the other people can see it. So again, it’s Internet technology that, if we didn’t have that, it would be very difficult. 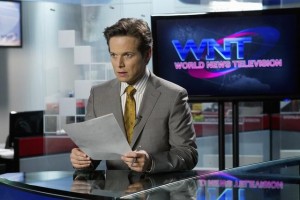 AX: What are some of the most challenging effects or sequences you’ve done on V?

PEARLMAN: In the season premiere, we did red rain. That was one of the more challenging sequences and it wasn’t even that long of a sequence in what was actually in the program, but having red liquid fall out of the sky was very challenging. We were shooting on location at a place in Vancouver that did not want us to stain the pavement, so we had to have a red liquid that wasn’t going to stain anything. We had a hundred and fifty extras that were going to get wet, so we needed to have doubles and triples on their wardrobe, so that we could shoot the scene multiple times. That wasn’t really even a visual effect, but that was one of the more costly, complicated, difficult practical effects that we did all season. In terms of the visual effects that we’ve done this [season], that sequence where Anna whips out her tail and stabs the captain of the ship, that one sequence, which was probably about a minute long, took eight hours to shoot.

AX: Were there any concerns about how to do that sequence without making it funny that something is coming out of an area of the body that is somewhat humorous?

PEARLMAN: Similar to last year, where we had the episode where Anna laid her eggs, she was in water and she had these little small eggs coming out of her nether regions and you don’t want it to look silly, so yes, that’s something that we spend a lot of time talking about when we’re designing what these shots are, that they can look scary, the can look cool, but we really try to stay away from the laughable, jokey thing. When SATURDAY NIGHT LIVE does the spoof on us, then we’ll know that we’ve really made it. 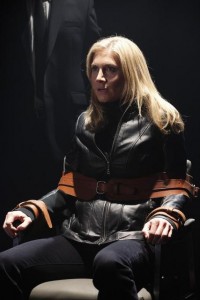 AX: Since you are in charge of making sure production runs smoothly, how much input do you have into what’s going on in the writers’ room?

PEARLMAN: I work very closely with Scott [Rosenbaum, the show runner] and the writers at all stages, so when they break the story, I’ll be involved in giving them creative notes and discussion, just in terms of the story itself, but also about production and what we can do. When we did the first episode [of the season], for example, the notion of the red rain was something that was added very late. After there was already a script, we added the idea of the rain, which was something that I came in and said, “Why don’t we do rain?” and the writers said, “Well, we didn’t think we could do that,” and I said, “Let’s do it. It’s the season premiere, we’ve got to make it great.” So Scott and I work very closely and I have a lot of input, certainly with production and the visual effects and the design and the locations and all that, that’s what I do in Vancouver.

AX: Do you know what the series finale will be, whenever that comes?

PEARLMAN: You’d have to ask Scott Rosenbaum about that. He and I haven’t had conversations yet about, if we were to go on five seasons or so, where the series would wrap up. We look at each season as like the chapter of a book. So the second season, we’re exploring a lot about the human soul. There are some other themes that we deal with in second season. The first season, we spent a lot of time talking about how Tyler [Logan Huffman] is the one, Tyler’s special, and we explain that in second season. The season finale I think closes this chapter of Season Two, but we do also introduce Marc Singer, who comes in in the finale and he plays an interesting character that, if we’re picked up for a third season, will provide us with a whole new kind of direction to go in Season Three.

AX: Do you have ideas for what the end of the series could be?

PEARLMAN: The Visitors could either leave or they could be assimilated completely, Anna could die, Erica [Elizabeth Mitchell] could die –

AX: The Visitors could blow up the planet –

PEARLMAN: Yeah, that would be bad, wouldn’t it? If you wanted to look back on how other series have ended creatively, you could realize the entire thing was a dream in some kind of weird way. I don’t know. I think that we live in a world of science-fiction with this show – we also live in a world of soap opera. So I think either of those genres can take us to a lot of very interesting and unexpected places.

As for what I would hope for for a series finale is something that the audience just doesn’t see coming and doesn’t expect at all. I think that’s what we try to do in every episode, is give the audience at least one pretty big thing that they’re not expecting. I think in the season premiere this year, we got to see Anna murder one of the captains of her ships in a way that, if anybody saw that coming, I’d like to meet that person. That was pretty out there. So hopefully we’ll be able to give that to the audience. We’ve got a lot of really cool stuff . Every episode [has been] a little different. We’re trying very hard to not make it seem formulaic, and I think that we really are going to deliver for the fans of the show.