Home » WonderCon 2011: Mark Valley reveals HUMAN TARGET Season 3 ideas for Chance … if there is a Season 3 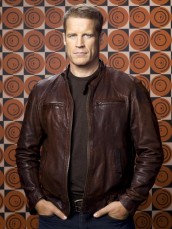 During the press event for HUMAN TARGET at WonderCon 2011 in San Francisco, Mark Valley, who plays Chance on the Fox show, gave us his opinion on where he would like to see his character go if the series gets picked up for Season 3.

“In terms of Chance’s overall arc, in the first episode he was closed down to the world and focused on doing his job and having some confusion about it and coming out of it,” Valley says. “The second season he started to open up a little bit. He had to in order to communicate with people, especially with the female characters. I’d like to see the third season where Chance really takes a leap and says ‘I’m really going to live in this world with regular people, I’m really going to give it a shot and go all the way and see how that works for him.’”

Valley jokingly adds that Chance could embrace virtues such as cooperation, non-violence and thinking things through.