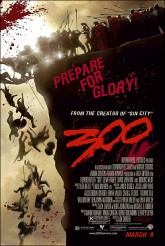 During the press event for the Greek Gods action film IMMORTALS at WonderCon 2011 in San Francisco, producer Mark Canton gave the low down on the planned 300 prequel XERXES.

Canton says that 300 director Zack Snyder (who likely won’t return to helm) and Kurt Johnstad are working on the film already and creator Frank Miller is working on the script.

“We have to very, very careful,” Canton says. “[300] is a movie that has been embraced in pop culture around the world. I feel like it will happen. We are very close.”