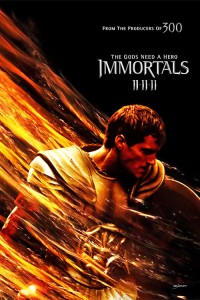 It’s a given there’s a lot of excitement and anticipation surrounding Zack Snyder’s reboot of SUPERMAN alongside producer Christopher Nolan. And the announcement that Henry Cavill is the new Superman/Clark Kent brings with it a whole other level of mystery.

So while at Wondercon 2011 promoting his new Greek Gods film IMMORTALS (arriving November 11, 2011), it was almost a necessity to get the actor to speak a bit about this landmark role.

“I am excited about it,” says Cavill. “Who wouldn’t be? It is a mega-opportunity. We are just getting started and I can’t wait to get the suit on and get going with it.”

As for whether he’ll be looking at other Superman’s who have taken on the mantle (Christopher Reeve, Brandon Routh), Cavill admits he’s doing his own thing with the iconic hero.

“I have not done the method of research of watching [other] actors perform,” Cavill admits. “The only way to do something is to do it yourself, otherwise it’s not true to you.”