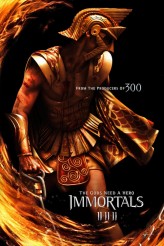 During the press event for the new Greek Gods action film IMMORTALS (opening November 11, 2011) at WonderCon 2011 in San Francisco, Luke Evans answered questions about him vying for the new lead in the continuation of the BOURNE franchise in THE BOURNE LEGACY from co-writer/director Tony Gilroy.

“It is a big deal – it is a fantastic role,” Evans says. “You have one actor [Matt Damon]  that portrayed the character three times successfully. I love the BOURNE films, but I would not be Jason Bourne in the film [the series is going to continue with another character]. I did meet with the director and liked him. The script that I’ve been given, or at least the parts that I have been given as they won’t let me see the whole script, is really well done.”