The executive producer talks cast and coping with critters 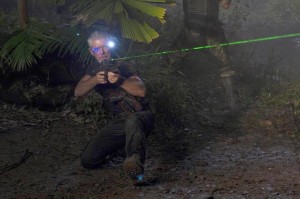 The hotly anticipated Fox series TERRA NOVA (debuting in the fall) made its convention debut at WonderCon 2011 in San Francisco today. While ASSIGNMENT X was trapped in press conferences that ran over its allotted time, we sadly missed the panel presentation which we were dying to see.

However, ASSIGNMENT X spoke with TERRA NOVA executive producer Brannon Braga recently and here’s part of the conversation about the series in this previously unreleased conversation.

In TERRA NOVA, actor Jason O’Mara plays a settler and Stephen Lang plays a military commander in a team that travels back to the dinosaur era to save the human race. As O’Mara just played a time traveler in his last TV series, ABC’s adaptation of LIFE ON MARS, and Lang was a military commander dealing with dinosaur-like creatures in the big-screen AVATAR, did Braga have any concerns about audiences associating the performers with their previous roles? 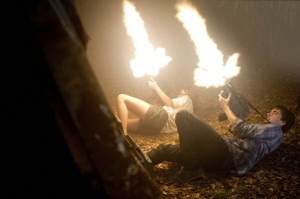 “Not really,” Braga replies. “We did discuss [O’Mara’s last job] and we did discuss Stephen’s affiliation with AVATAR and this has elements that could be construed as similar, but the truth is, we cast the right actors for the roles and once you see it, any concerns will go out the window. I don’t see how casting one of the leads from the biggest movie in history is in any way a negative thing. It’s hard for me to imagine,” he adds with a laugh.

As to TERRA NOVA’s non-human characters, how exactly will the dinosaurs interact with the settlers?

“There are some very dangerous monsters,” Braga says. “What’s interesting is, the technology [the humans have] developed is mostly non-lethal. The philosophy they have in TERRA NOVA is not to kill any animal that you don’t have to. So you’ll see some really cool futuristic weaponry like sonic cannons, to drive away the dinosaurs and huge tranq [tranquilizer] discs to knock them out if you can. But there are bullets, too, because sometimes the non-lethal stuff doesn’t work.”