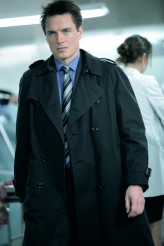 Captain Jack the Star Whore and sexy Gwen Cooper are back to save the world!

Well it’s been awhile since the sexiest Star Whore (and believe me that IS a term of endearment)  in the known universe has graced our screens, but omnisexual Captain Jack Harkness (John Barrowman) is finally back and the heartbeats of all of our gay communities around the world can continue!

TORCHWOOD: MIRACLE DAY is a new series (or fourth season) co-produced by STARZ and BBC Worldwide. It springs out of the creative pairing of series creators Julie Gardner and Russell T. Davies and returns the surviving and at this point much-beloved characters of TORCHWOOD to the screen.

When last we saw Captain Jack, he was in an alien bar somewhere at the ass end of space and was in the process of being hooked up with Midshipman Frame (Russell Tovey). Jack was pretty much as down on his luck as we had seen him, since the loss of TORCHWOOD, his partner (boyfriend) Ianto (Gareth David-Lloyd), and the fact that he had to sacrifice his own grandson to save the world. So it’s unclear how much time has passed when Jack turns up to once again save the day, and to keep the secrets of the former Torchwood Institute a secret.

He doesn’t seem much worse for the wear, and John Barrowman is as foxy as ever. The man doesn’t age! He might have a couple of age lines here and there, but damn is he aging well. This is a good thing since he’s playing a character that’s immortal. Speaking of which, anybody else catch the “cut of his head and see if he’s still alive” comment in the morgue? Since Jack is supposed to end up as the Face of Boe…that was a nice nod to his own eventual end (or evolution if you will).O f course to make Jack’s return complete we need more semi-clothed scenes and perhaps a sexual encounter or two to get the blood racing.

When we last saw the Welsh beauty Gwen Cooper (Eve Myles) she was very pregnant, married, and biding Jack farewell as he was whisked into the sky. Torchwood was destroyed and the future seemed to be a lot more quiet for our gun-toting and ass kicking heroine. It is nice to see in the start of MIRACLE DAY that she and Rhys (Kai Owen) are settled down and living the quiet life in the Welsh countryside. Of course, it is equally satisfying to see her open up her massive closet of weapons at the slightest hint of trouble. One of the best sequences in this first episode is Gwen putting earmuffs on her infant daughter, and then packing the baby into the hallway with her as she fires an entire clip of ammo from her handgun to take down a black helicopter that is attacking their home. What makes that scene so brilliant is the fact that the baby is actually smiling through the whole scene!

So yeah, I haven’t been addressing the big plot heavy stuff of no one dying on the planet. That’s the main gist of MIRACLE DAY, just in case you somehow missed the ad campaigns or what have you. I am just far more interested in talking about seeing the TORCHWOOD gang again, even PC Andy (Tom Price)! I’ve missed Torchwood, and as much as I love DOCTOR WHO, I need my somewhat more adult fix from that universe that only comes in this form.

The new cast members are several levels for me. Bill Pullman as Oswald Danes, a convicted pedophile and murderer is amazingly creepy. I’ve always only really seen Pullman in good guy roles, so to see him immerse himself so completely in a character that is so without conscience or remorse is really interesting and fun to watch. CIA agent Rex Matheson (Mekhi Phifer) is kind of an irritating character to me. He is one of the millions that should have died (due to a few poles through the chest in a freeway accident) but didn’t. He seems to be convinced that Torchwood has all of the answers to the MIRACLE DAY phenomenon.

Phifer is OK, but his character just seems kind of flat. He’s basically there to bring the team to the U.S., and he’s actually pretty loathsome in his first on-screen exchange, jabbering about how he’s getting a promotion because the other person who was up for it has a wife who was just diagnosed with Leukemia. Nice guy. Os, honestly we’re probably not supposed to like him too much. Esther Drummond (Alexa Havins) is another CIA agent who is tracking down the remaining files on Torchwood, but her part has been relatively small thus far and it remains to be seen how strong an addition she is.

So, will this start a whole new stateside TORCHWOOD series? I sincerely hope so! I realize that John and Eve don’t live here, but I hope that if a new series foes forward that they are a part of it. They are the heart and soul of the Torchwood team, and they are the characters that we all cheer to see again and again. I am just completely satisfied with the start of the new series, and I’m looking forward to what is lurking just around the corner for each new episode!