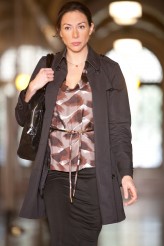 In the second episode of the all-new BBC/Starz co-production of TORCHWOOD: MIRACLE DAY, a traumatic departure from London kicks things off as Jack (John Barrowman) and Gwen (Eve Myles) are forcibly taken to the United States. The plane trip doesn’t go well, with Jack poisoned and Rex (Mekhi Phifer) realizing that it might be hard to trust anyone in the new world. Meanwhile, Esther (Alexa Havins) has to go on the run after the CIA turns against her and Rex. Who wants Torchwood and anyone connected with them eliminated? Are they the same people that have turned up the human life dial to eleven? What are some of the terrible trials facing humanity in a world where no one dies? And in this new paradigm, will a loathsome person like Oswald Danes (Bill Pullman) suddenly become a figure of pity and perhaps even…hope?

While the debut was a good start, this episode does a great job of upping the ante, raising tension on all fronts as Jack is attacked, Esther is pursued from CIA Headquarters, and Dr. Juarez (Arlene Tur) joins other medical professionals in discussing what the absence of death means for the planet. It’s an intelligently written, well-paced and well-directed installment, and it still manages to feel fresh while still a part of the TORCHWOOD series.

In fact, if this show really had been as “Americanized” as some fans want to complain, they wouldn’t have made the principal US lead into such a hateful figure. Mekhi Phifer is superb in the role of Rex Matheson, but his character is a man without a moral compass, capable of laughing about a colleague’s horrible misfortune in last week’s episode and separating a mother from her baby with a smile on his face this week. It will be interesting to see if he grows into someone better – a spark is already visible by this episode’s end.

If there’s one complaint that TORCHWOOD fans could voice, it’s that Barrowman and Myles aren’t getting as much to do as their co-stars, but to be honest, it’s pretty balanced over all. Myles does spend most of this episode sitting on a plane until she gets to take charge and save Jack by marshalling all their resources and literally disassembling the plane from within. It’s an excellent sequence, and she really does communicate the rage-enhanced authority. She also gets one of the best lines of the episode (seen in the show’s trailers) when she punches out an evil CIA agent (Dichen Lachman) after the simple comment, “I’m Welsh.” In movie theaters, this would have audiences cheering. Barrowman, by contrast, is mostly out of the running, looking pale and vomiting thanks to arsenic poisoning, but then again he’ll recover. He conveys Jack’s agony very well when the cure proves to be nearly as bad as the poison. At least he gets the amusingly meta line “they spent a lot of money on this” as the show heads to American shores.

Other performance highlights this week include Pullman, still running rings around everyone else as the creepy but complex Oswald Danes and getting the other line of the episode (“If the Devil himself walked this Earth, he’d surely be working in PR”), Havins as the endearing and embattled Esther Drummond, and Wayne Knight (Newman!) as Brian Friedkin, who turns up at the CIA to make Esther’s life difficult.

Too often a science fiction premise will be introduced and utilized in only the most basic form, but here we get a fascinating exploration – especially in one neatly compact montage at a medical conference – of the many medical and cultural ramifications of “Miracle Day.” There’s a great scene where Juarez realizes that they need to change everything they know about triage, while ominous revelations that living people with infections have now become incubators for antibiotic-resistant bacteria, that although immortal we are all still aging, and that pain management will become the principal requirement of health care are just a few examples of how this show is posing thoughtful questions in the framework of a fanciful tale. There’s also the sly commentary on our current health care crisis through the allegorical discussion of how we have to restructure the system or face disaster.

The episode also ends with another exciting punch, including a disturbing non-death with a sadly lame but forgettable special effect, as allegiances shift and a new Torchwood team starts to emerge from the remnants of the old. Next week we’ll probably see more of Lauren Ambrose’s Jilly Kitzinger, whose smarmy PR routine aimed at both Danes and Juarez is likely to change lives (but for better or worse?), and the question of whether morphic fields are part of the miracle will surely crop up again. All these and more plot threads will resonate into future episodes. See you then!