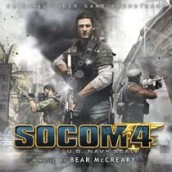 The percussion-filled musical worlds of TV’s revamped BATTLESTAR GALACTICA might have flown into the sun, but the thrumming echoes that made Bear McCreary’s scores so distinctive can be heard very loud and clear in his videogame soundtrack to SOCOM 4.

For his second entry into console music after the impressive orchestral rocketeering of DARK VOID, McCreary takes on the more down-to-earth (if still more than a bit superhuman) adventures a U.S. Navy Seal team, this time blasting away for the flag in Korean territory.

Having brilliantly brought incongruous bagpipes and Asian gamelans to outer space, McCreary’s shown he knows how to handle ethnic music with the dexterity that any Seal would have for a firearm. And here McCreary blasts out a region’s worth of flutes, drums and any other bang-able instrument capable of taking down the bad guys.

Far from some soundtrack that’s all about percussive sound and fury, McCreary also makes impressive thematic use of the full range of the Skywalker and Hollywood orchestras at his disposal, creating a work of unexpected beauty, and emotion amidst the rocking first-person shooter guitars and synths.

It won’t be long before any GALACTICA fan will feel they’re right back home piloting a Viper through the Cylon hordes, with all the symphonic nobility and pan-ethnic stylings that implies.