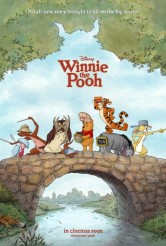 WINNIE THE POOH is a lovingly crafted film that matches the original production of THE MANY ADVENTURES OF WINNIE THE POOH to a T. The film has the same sort of water colored backgrounds as the original, and the animation on the characters has been done in such a way that you can still see the original pencil drawings (to a certain extent) that the cels were crafted from.

This is a fairly simple story of Winne the Pooh (Jim Cummings) and his friends in the Hundred Acre Wood, embarking on a quest to find their friend, the little British boy Christopher Robin (Jack Boulter). All of your favorite characters are back, and they all sound remarkably like they used to when you were a kid. Tigger (again Jim Cummings) is bouncy and wild as always, Eeyore (Bud Luckey) is down in the dumps and missing his tail most of the film. Owl (Craig Ferguson) is actually even more hoity toity and useless with his supposed knowledge than he ever was before, and all of the rest of the characters fall into their usual respective places.

One of the endearing elements of the film, and something that was used in the original WINNIE THE POOH is to have the characters collide with the text of the story itself and to interact with the omniscient narrator (John Cleese). These small touches really help create the feel of this story linking directly to the first film.

There is some very clever use of live action stuffed animals both in the beginning of the film, and at the end, and the room that was created to be Christopher Robin’s room is completely charming and done in period decorations from the toys to the books, and all of the furnishings.

The story is simple and charming, and the movie rolls out at a good pace. The only problem is that the film is so short. Including the cartoon at the beginning about the Loch Ness Monster, the entire thing runs only just over an hour.

The Loch Ness short narrated and voiced by Billy Connolly is just as charming as the POOH film, and harkens back to other Disney shorts of yesteryear like THE RELUCTANT DRAGON.

For people who grew up with the classic Disney Pooh this is a chance to re-visit your childhood, and perhaps you can introduce new viewers to the Hundred Acre Wood for the very first time!