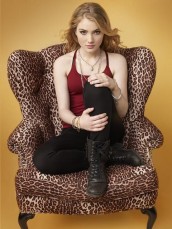 After sort of suffering through the premiere episode of THE NINE LIVES OF CHLOE KING, I’m still a bit confused as to what exactly to think.

So many shows have aspired to be the new generation’s BUFFY THE VAMPIRE SLAYER, and so many of them have failed. MTV’s recent TEEN WOLF comes close to the wit and charm of the that Joss Whedon-created masterpiece, but CHLOE KING feels forced. It’s trying too hard and it’s also not helped by the brightly lit and TV-friendly shooting style that makes the series feel more like a Nickelodeon or Disney show than an ABC Family series or even a close descendent of BUFFY.

The story follows high schooler Chloe King (Skyler Samuels) who discovers she has some hidden powers the day she turns 16. Namely, she’s become very cat like. Her reflexes are sharp, she can run super-fast, she has sharp claws and she can be thrown off a tall building and survive.

Chloe is surprisingly not that shocked about the revelation that she’s part of an ancient race called the Mai that have been hunted down by humans for centuries. She’s been discovered and now she has to find a way to live with her new powers and not get killed in the process.

Helping her out are her Watchers, I mean, her unlikely protectors Alek (Benjamin Stone) and Jasmine (Alyssa Diaz). Also part of her circle is best buds Amy (Grace Phipps) and Paul (Ki Hong Lee) who know her secret while she strikes up a potential romance with Brian (Grey Damon) who could die if he and Chloe were ever to kiss. Rounding things out is Chloe’s adoptive mom Meredith (Amy Pietz) who is unaware of her daughter’s new slaying, I mean cat-like abilities.

First, let’s start off with the good. The show has a nice breezy feel to it, and Samuels is quite good as Chloe. She’s a little rough in spots during the pilot (sh tries too hard, but it’s her first lead role), but you can see her slowly easing into the bubbly, quirky yet serious nature of Chloe throughout. She’s a find, and she’s the anchor which will keep the series from getting stale fast.

Stone, with his English accent, also adds some gravity to the mix and brings a nice chemistry with Samuels  as well.

Based on the book series by Liz Braswell, there seems to be enough mythology to go around and once they get through this introductory phase, the stories might start to get a little more interesting (and hopefully darker). Chloe’s dad is a mysterious figure who will likely play a major role in the season to come even though he is just alluded to briefly (he left the family).

Now the bad – the show is terribly derivative and the consequences and actions of things that happen during the pilot are not as serious as they should be. Chloe is as freaked out to learn she has claws and is part of an ancient race. Whatsmore, she doesn’t seem all that devastated that her kiss has killed a human.

The look of the show, as mentioned above, is too perky for the content. There’s no edge to it whatsoever which could turn off a considerable portion of the audience that might actually enjoy it.

That said, the potential is here for THE NINE LIVES OF CHLOE KING. It’s BUFFY-lite for a younger audience and it’s pretty much harmless fun. I doubt I’ll be returning for second helpings (unless I’m forced to review it), but for what it is, there’s been far worse out there.

Click on link: for AX’s review of the THE NINE LIVES OF CHLOE KING – Season 1 – “Redemption”