Can you believe it’s been twenty years since Walt Disney Pictures released the live action movie THE ROCKETEER, based on the comic books by Dave Stevens? Well, now D23 (the only official fan club for Disney) and Creature Features are presenting a very special event at the El Capitan Theatre in Hollywood on June 21st.

This event commemorates the release of THE ROCKETEER, and the film will be playing in the exact same venue that it opened two decades ago. The print of film has been newly restored and digitized and the screening will be preceded by a star studded guest panel. Kevin Smith hosts the Q & A which will have director Joe Johnston (who’s new movie CAPTAIN AMERICA THE FIRST AVENGER is another WWII Nazi battling flick), Bill Campbell (the Rocketeer himself!), make-up designer Rick Baker, screenwriters Danny Bilson and Paul DeMeo, and renowned illustrator William Stout. This panel will also feature rare film footage and photos!

After the screening the party then moves across the street to the Hollywood Museum, located in the nearby historic Max Factor building, where guests are invited to explore four floors of movie memories and exhibits highlighted by a special presentation of props and costumes from THE ROCKETEER, curated exclusively for this event by the Walt Disney Archives.

There will also be a variety of souvenir and promotional items for sale at the event. Keep in mind kids, this is the ONLY place you can pick this stuff up before it starts hitting eBay for three times the price! 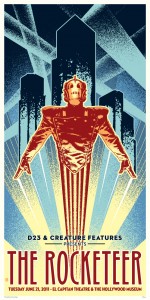