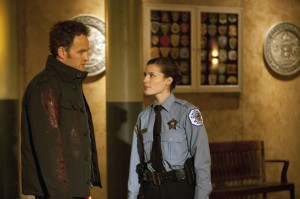 As much as the networks are loath (or maybe that’s terrified) to embrace serialized TV series (preferring the more repeatable standalone procedurals), there’s something to be said for shows with ongoing arcs.

Case is in point is the recently canceled THE CHICAGO CODE and its penultimate episode “Greylord and Gambat.” Unlike many of the episodes that followed a specific crime which usually had some peripheral tie to our main baddie Alderman Gibbons (Delroy Lindo), this time the whole episode deals with the ramifications of the season-long arc of trying to take the corrupt Gibbons down by Superintendent Colvin (Jennifer Beals).

Meanwhile, undercover cop Liam Hennessey (Billy Lush) has gotten so close to the Irish mob boss who’s in bed with Gibbons that the mob boss’s daughter is falling for Liam. With the Grand Jury investigation underway, it’s revealed that there is an undercover cop in the mob boss’s organization, and Liam has been found out.

He races against time to do one last thing – get a secret ledger that implicates Gibbons, which he successfully does, but not without getting shot up real bad.

Meanwhile, it’s clear Gibbons knows his number’s up and he visits Wysocki in an attempt to win him over by telling him he knows who killed his brother.

The kind of storytelling in “Greylord and Gambat” is what THE CHICAGO CODE does best. It wraps many different story strands together into a taut, tense and perfectly told tale.

And one of the reasons why it works so well, is it really digs deep into its mythology. This being the second-to-last episode, it’s amping up toward a huge pay-off (and hopefully a satisfactory series finale). To dilute it with a random storyline would be criminal. Thankfully, they did the right thing.

Networks really need to stop being fearful of ongoing story arcs. Sure, syndication needs episodes that can run at random times, but most syndication packages air episodes in seasonal order anyway. If the show is good, people will follow, no matter how complicated (LOST anyone?)

Still, it’s a bummer that THE CHICAGO CODE got the ax. It has an amazing cast, great writers and solid directors. They make each episode very unique and the show’s storytelling makes it unlike any other cop show out there. With ratings rising last night for this and last week for the canceled comedy BREAKING IN, Fox should have reconsidered salvaging these two series for another go-around. Instead, a whole bunch of new shows, nobody cares about will debut next fall, will fail and then they’ll be kicking themselves for having these diamonds in the rough already established and ready to go.