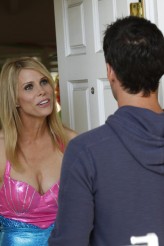 Two blah segments, redeemed by a slightly above average one 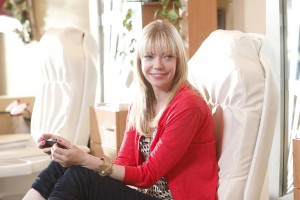 I don’t envy the writers and producers of LOVE BITES – NBC’s summer anthology series about love, romance and other dysfunctional relationship woes.

It has to be hard to come up with new characters, situations and scenarios every week and then wrap them around a common theme. With established series, you have regular characters and quirks to carry you through those weeks where nothing is working.

Here, outside of three recurring lead (who usually end up playing supporting characters), the show is largely original material every week.

It’s made for some pretty uneven episodes and some good ones too with this week’s “TMI” landing somewhere in the middle.

TMI stands for “Too Much Information” and follows the somewhat inter-connected stories of people who should keep their mouths shut.

In “Fetishes,” Bridget (Ashley Williams) reveals to her boyfriend Jeff (James Roday) that she gets turned on by men in uniform. He tries to fulfill this part of her fantasy, but fails miserably and tries to reveal a fetish of his own (being into feet) to make her not feel so bad.

Of course, he’s lying about the fetish, which results in an awkward and unfunny comedy of errors. This is not the show’s finest hour.

“Becki’s Situation” isn’t much better as Becki (Vanessa Marano) thinks she has an STD from sleeping with her boyfriend (who has now dumped her for his old girlfriend). She doesn’t know how to talk to her mom Kristen (Cheryl Hines) about it, so LOVE BITES’ regular Judd (Greg Grunberg) tries to help her out.

Oddly, this episode is pretty pointless and aside from some decent moments between Judd and Becki, it really builds to a rather uninspired conclusion.

The best, and longest segment of “TMI” is “Creepy Dad” which is actually quite good – with a pretty original premise to boot. Brian (Jay Harrington) is recently divorced from his shrew ex-wife and trying to raise his eight-year old daughter on his own. A dinner with Kristen goes bad, when everything he tries to do comes off creepy. This includes some pretty funny moments as Brian, very unaware, continues to dig a bigger grave for himself with every thing he does.

Harrington is quite good, managing to make Brian’s lack of judgement to come off quite innocent, while also bringing depth to his relationship with his daughter.

“Creepy Dad” is the kind of segment LOVE BITES should strive for more – taking a conventional situations and slowly spiraling it out of control into something fresh and new.

And what’s up with Annie (Becki Newton) being AWOL for the last two episodes? I’m actually starting to miss her (my guess is Newton had her baby in real-life and had to take a couple of weeks off).

LOVE BITES still has a consistency and tonal problem though, and one out of three segments being good is a horrible ratio, but with only a handful of episodes left before the series goes off the air for good, I guess this little NBC experiment can’t win them all. 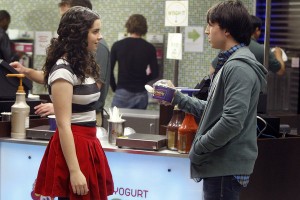