Show choir goes Gaga again as everyone deals with self-loathing in a rather preachy, disjointed super-sized episode 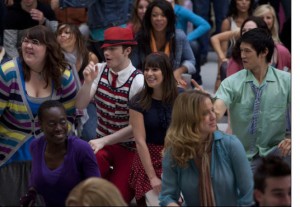 With the amount of story GLEE chews through in “Born this Way,” it reminds the viewer how necessary it is for this series to gain a little more consistency with doling out story for its core group of characters and actually dig a little deeper than “theme week” every week.

That’s not to say that “Born this Way” doesn’t have a theme. Going Gaga (as in Lady Gaga) for a second time, her latest single about accepting who you are is the focal point of the internal dilemmas facing more of the characters on the show this week.

It all starts when Rachel (Lea Michele) breaks her nose and is encouraged by her doctor to get a nose job. This brings up a whole laundry list of imperfections each member of the Glee club must grapple with internally themselves.

Hence, tons of secrets come to the fore. We learn Quinn (Dianna Agron) used to be a chubby, big nosed little girl named Lucy, who got a nose job, lost weight and changed her name to Quinn.

Emma (Jayma Mays) realizes she needs to confront her OCD head-on and with Mr. Schue’s  (Matthew Morrison) encouragement, goes to see a therapist herself.

And the biggest bit of acceptance/non-acceptance comes when Dave Karofsky (Max Adler) is confronted by Santana (Naya Rivera). She realizes he’s gay and blackmails him into making amends with Kurt (Chris Colfer) so Kurt can return to the school. In exchange, she’ll be his beard, since she’s living the same lie as a closet lesbian and the two of them can go on to being the Prom King and Queen.

This naturally paves the way for Kurt’s return to McKinley High and it’s a welcome return with much of the episode focusing on him re-integrating with his friends.

While there are many aspects of “Born this Way” that totally hit the mark, it’s also a disjointed and overlong 90 minutes containing many pandering and heavy-handed moments alongside those moments that are actually quite emotional and honest.

The positives: The moment with Emma at the therapist office is by far one of the strongest scenes in the entire episode. It’s true and pure, and gets to the heart of what the episode is about in a real way. Loved it. Also thought the moment where Emma finally takes the plunge in trying to accept that she needs to make a change (namely taking medication) was well directed.

The big moment where Kurt, Dave, their parents, Mr. Schue and Principal Figgins (Iqbal Theba) all have a pow wow about what happened and how much Dave has changed (or perhaps not) was incredibly well-written as well. The discussion they have was about as believable and balanced as the show has been in some time in dealing with anything. And then the one-on-one with Dave and Kurt also had some nice moments too – though, I still don’t think Dave would have completely turned around as fast as the show makes us believe he does, but you can’t have it all.

The Quinn revelation, as out-of-left-field as it is, also delivers a few poignant moments as well, including Finn (Cory Monteith) saying how he can see who she really is for the very first time.

The song selection this episode is uneven too. Perhaps the highlight is the mash-up of “I Feel Pretty” from WEST SIDE STORY and TLC’s “Unpretty” which is a duet between Quinn and Rachel. Their harmonies are lush and it’s one of the more clever mash-ups all year. Unexpected and super cool.

With Kurt now at school, the Warblers make their last performance (for awhile at least, we can assume) as Blaine (Darren Criss) serenades Kurt with “Somewhere Only We Know” by Keane. I like the Warblers as performers, but didn’t feel this song both in context and performance. There’s been better.

Kurt sings “As If We Never Said Goodbye” from SUNSET BLVD. as he returns to school trying to re-integrate himself (so-so, the song is on target storywise though), while Finn sings the Sammy Davis Jr. tune  “I’ve Gotta Be Me” (clever, but I definitely wouldn’t download the track either).

That leaves “Born This Way” sung at the end by the entire group. Again, it’s well-produced and it gives many of the cast members a chance to vocally shine, but the song itself is so much of a rip-off of Madonna “Express Yourself,” it’s very hard to connect to the song without being reminded that it’s been done before and better.

One of the weirdest tracks on the entire show is a techno song that only has the words Barbra Streisand in it – resulting in a big dance-off at the local mall. Although it was designed as a fun intervention for Rachel engineered by Kurt in attempt to make her not get a nose-job, it really felt like random filler when all was said and done.

Overall, “Born this Way” is a wildly uneven episode, which may have been strengthened by a shorter running time. I was more engaged, for the first time, in a long time, by the actual story. And surprisingly, whenever the show stopped for the singing, I was actually bored to tears.

As the GLEE cast continues to expand and shine focus on supporting players like Dave and Lauren Zizes (Ashley Fink), the show is getting unwieldy in the sheer number of people to keep track of. At some point, the series needs to slow down, take stock and figure out who and what this show is about again. Only Kurt has really had a believable and solid arc the entire year – this was his season. And I’m still amazed they kept him away from McKinley as long as they did (kudos for the producers for keeping that part real). It’s just a shame that the rest of the cast and their respective arcs haven’t been given the same amount of time, care, consistency and respect.