Home » DANCING WITH THE STARS Recap: Pro wrestler Chris Jericho body-slammed out of the competition 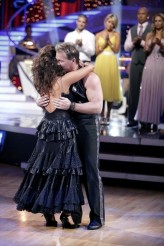 Season 12 of DANCING WITH THE STARS is getting really nit picky! At this point in the show it should be called One False Move because anyone can and will go home if you have one less than spectacular night and not enough of a fan base to pull you through. And that’s just what happened with pro wrestler Chris Jericho who blew it with a weak performance on Monday’s telecast, leaving behind just six stars … Romeo, Kirstie Alley, Ralph Macchio, Chelsea Kane, Kendra Wilkinson and Hines Ward in a dance off race to the end.

In a new attempt at creating even more suspense for the results show, the DWTS producers decided to do a preshow before the show, and not just a recap episode as in the past, but an actual show entitled “The Road to the Finals”. There were two “live” performances, one from Hanson and the other from Constantine & the cast of the Broadway show ROCK OF AGES. Also part of the show was a tearing down of each couple’s strengths and weaknesses while they stood nearby helplessly watching. They were ranked, shuffled and categorized, i.e. the dark horse, the front runner, the fighter, etc. as every movement, every bit and piece of them scrutinized, and that was before the results show even began!

When the real show finally began we were treated to some New Kids on the Block/ Back Street Boys singing and wiggling up and down the dance floor with the DWTS Troupe dancing beside them, along with Tony Dovolani and Lacey Schwimmer. If anything the “boys” certainly are a “guilty pleasure”, so how apropos it is that they would be performing during this of all weeks. Video segments of the stars expressing how badly they want to stay in the competition and another with the DWTS Troupe, along with a very charming Macy’s of Stars performance were scattered throughout the show before we finally all received the news of who was in and who was out.

So, Jericho leaves the stage, coming in seventh place for season 12. And now there are six. Wilkinson made it through …again! She is the Bristol Palin of the season. Well, maybe I wouldn’t go that far. Wilkinson shimmies like nobody’s business. Here we go – onto week seven. Stay tuned!

Check out photos below of New Kids on the Block, Backstreet Boys and more from Week 6 Elimination Night.