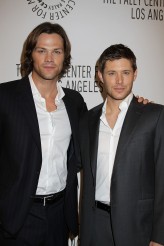 AMERICA'S TOP MODEL, GOSSIP GIRL and 90210 no longer on the bubble either

The CW gave a vote of confidence to many of its series today with an early renewal announcement for two of its major genre series’ SUPERNATURAL and THE VAMPIRE DIARIES.

THE VAMPIRE DIARIES getting a third season was a given, considering how powerful and popular that show is on Thursday nights, but it’s SUPERNATURAL getting its seventh season that’s the big announcement.

While it’s proven to be a solid performer on Friday, the show’s future past last season when creator Eric Kripke stepped down as showrunner put it in jeopardy. However, with Kripke still peripherally involved, and the show still finding clever ways of telling creepy stories, it’s proven that there’s still life left in the franchise.

Also renewed are AMERICA’S TOP MODEL, GOSSIP GIRL and 90210, but you didn’t come here to read about that, right?

Not on the list is NIKITA, ONE TREE HILL and HELLCATS. As with all bubble shows, everything depends on how strong the CW pilots are this season in comparison to these three, though, frankly ONE TREE HILL will likely pull off another 11th hour save, since it continually over-performs every year for the network.