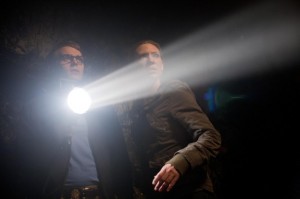 Even though Peter Bishop (Joshua Jackson) has been wiped from the FRINGE timeline due to events at the end of Season 3, “Alone in the World” continues the Season 4 thread that not all of his presence has been properly eliminated.

Walter (John Noble), his father, is starting to see the adult version of Peter pop up in mirrors and reflections in TV screens. He thinks he’s going crazy – and has no idea that it is indeed the son he thinks died (twice) when he was a child. Once in this world, the second time when he tried to bring him back from “over there.”

Meanwhile, the corpses of two twelve-year old boys bring the Fringe team in to figure out what’s going on. What they learn is these kids rapidly decomposed when the were trying to attack another kid. Turns out the attack was caused by some kind of spore with growing intelligence that has a link with the surviving kid.

The episode deals with loss in many ways – and Walter’s dealing with the young boy who could die if he can’t find a way to extract the symbiotic relationship he has with the spore. It parallels Walter’s own struggle with failing to save Peter. It’s major emotional stuff.

Meanwhile, Olivia confides in Walter that she’s been dreaming of a strange man – and she’s drawn a picture of him (it’s Peter). The two of them – still unaware it’s adult Peter – have decided to find out who it is and track him down.

“Alone in the World” showcases what FRINGE does best – it take s a kernel of its mythology (in this case “missing Peter”) and hinges a creepy story on top of it to hit home the various themes. It works well – with the mystery providing a really creepy and unsettling story about being “alone.”

Noble is fantastic giving a great performance as always – but the nuances that are there with his own guilt for not being able to save his own son adds to the dramatic angst.

It’s also commendable that the FRINGE writers haven’t taken the easy way out and resisted bringing back Peter full time right away. It looks like next week, episode 4 of the season, we’ll start to get some resolution in terms of his potential return – but they’ve let this play out longer than most TV series would. It feels more natural this way and it adds even more to the storylines they’re telling.