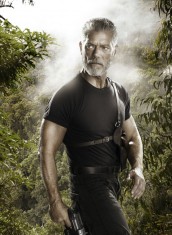 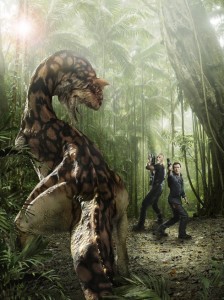 The characters in TERRA NOVA, which airs on Fox Mondays at 8 PM, have it rough. They’ve left behind the crowded, airless, polluted world of 2049 for the environs of Earth, circa 80 million years BC. There is fresh air and plentiful food, but there are also people-eating dinosaurs, power struggles and a supremely tough military man in charge, Commander Nathaniel Taylor, played by Stephen Lang.

Lang (should anyone need reminding) also played badass baddie Col. Miles Quaritch in AVATAR, the most successful motion picture ever made. He was also the villain in this year’s remake of CONAN THE BARBARIAN, a brigadier general in THE MEN WHO STARE AT GOATS and hapless reporter Freddy Lounds in the original film version of MANHUNTER, as well as appearing in numerous plays on and off Broadway, to name a few of the New York-born actor’s projects.

ASSIGNMENT X: Were you looking to do a television series at this point in your career, or were you specifically attracted to TERRA NOVA?

STEPHEN LANG: Well, I was open to pretty much anything – put it that way. I’m always looking for a good project. I had finished some films and when this came along, it came along at just the right time. It was an interesting, high-profile project, a wonderful role, so I couldn’t think of any reason not to do it.

AX: Did you audition for TERRA NOVA, or did they come to you and say, “We think you’re the guy for this”?

LANG: They gave me the script, I called them, they asked for a meeting and that’s what we did.

AX: Did they tell you what about you they felt was right for the role?

AX: That people would be a little more likely to draw a comparison?

AX: Well, AVATAR and TERRA NOVA aren’t about the same thing at all. For starters, on TERRA NOVA, you don’t have another species of people.

LANG: No, but I believe the comparisons are inevitable. 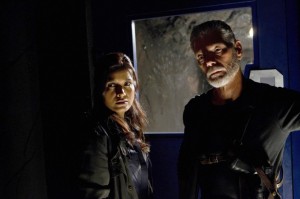 AX: Is there any similarity in the work technique between TERRA NOVA and AVATAR, as far as acting opposite creatures that aren’t really on set with you?

LANG: Absolutely. There’s a fair amount of green-screen work in this. There are going to be a lot of computer-generated beasts and that certainly was the case in AVATAR. So the answer to that is, “Sure.” That has to do with eye-line. That’s really what it’s all about. Whether it’s a tennis ball on a stick or whether it’s a paper mache head of a dinosaur, it doesn’t really matter, because what you’re doing is, you’re following the eye-line and you’re really projecting what you’re supposed to be seeing onto it.

AX: Do you like playing these cranky, self-certain military characters? There seems to be a little bit of through-line between Commander Taylor and AVATAR’s Col. Quaritch and a few other characters you’ve played.

LANG: I’ve played a lot of authoritarian characters and some military characters, but it doesn’t bother me in the least. Sometimes it’s fun and it’s valuable and instructive to do variations on themes.

AX: Do you enjoy playing a character who gets to say, “Listen, all of you!” and fifty other characters actually listen?

LANG: Well, I enjoy it – I enjoy people paying attention to me, but I enjoy listening as well.

AX: Do you direct as well as perform?

AX: Is there any correlation between directing and to playing a character who gives direction?

LANG: Quite possibly. I think that they both have to do with leadership, the ability to lead, and also sometimes projecting the image of leadership when you’re actually not sure what to do, which is a good thing. You know, sometimes you’ve just got to look like the captain.

AX: From what’s been said by some of your TERRA NOVA colleagues, it sounds like some of the behind-the-scenes action was almost as dramatic as some of what’s onscreen, in terms of the creek rising around the area where filming was happening in Australia, and the filming team almost getting flooded and the camera getting stranded there. Did you have a moment of thinking, “I wonder if we’re going to be trapped on the wrong side of the river?”

LANG: Well, we went up and down a couple of slippery slopes, and I do remember we were filming one day at the waterfall when it rained, a really sort of deluge-type rain stopped and started no less than eight times and that was great. We just took shelter, and I never was particularly threatened or worried, I just sort of held my ground. 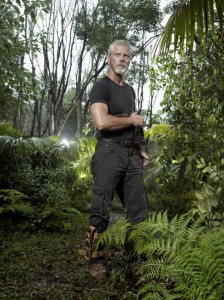 AX: Do you get to do anything that you particularly enjoy physically on TERRA NOVA – running, jumping, shooting?

LANG: Well, there’s a certain amount of stunting that went on during this episode that I did. I still enjoy it. I think maybe I’ve lost a step or two over the years, but I still like the physical stuff, because when you have a physical task, it takes your mind off the acting, which is a good thing.

AX: Do you understand the time paradox in TERRA NOVA?

LANG: No one understands the time paradox on this show. Stephen Hawking doesn’t understand the time paradox on this show and neither did Albert Einstein, no of course I don’t. What I think works very well is that the fabric of time is torn accidentally, or seemingly accidentally, because one could say there are no accidents. And so it is not absolutely crucial that the people involved, which is to say the people who take advantage of it, do understand it fully. They continually try to understand it, but they don’t. And so – I’m not trying to get out of the question, I’m just saying that I believe that the time paradox will be addressed over a period of time in this. I think it has to be and one would want it to be, but I’m not sure that it will ever be resolved or even successfully addressed.

AX: Does your character Taylor believe there are no accidents? I mean, does he believe this is creating an opportunity, or does he believe he’s serving his country? What is Taylor’s mindset in his spearheading of this expedition?

LANG: Well, I think he’s an explorer at heart, I think that he is born probably the type of man who has said to himself many times, “I’ve been born in the wrong era. I need mountains to climb, I need challenges.” And I think that the future that we postulate in this show is bleak, grim and somewhat hopeless. So if there is something new to be done and if there’s glory to be gained and if there is good to be done, then I think that’s what motivates him very much. And then having gone back there [into the distant past] and survived there, I think he takes his responsibility as, as it were, the first man very, very seriously.

AX: So he sort of feels like he’s planted his flag here and he’s responsible for it, but it’s also his own world, in a way?

LANG: Well, I think that that’s true, what you just said. I think there’s more to it than that – I think he’s a very conscious guy, so he knows the failings of that attitude as well. He’s not blind at all. And yet I think just over time, the stress of dealing with problems, of being Dad, of being father to everyone, I think it breeds a certain type of – I don’t know if “rigidity” is the word, but a way of doing things. And a belief in your own self. So that’s what creates conflict.

LANG: Well, I have three films this year. I have a film called WHITE IRISH DRINKERS and I have a film called CHRISTINA coming out and I have [the recently-released] CONAN THE BARBARIAN. I play Khalar Zym, who is in fact a villain. The villain. I’m very bad. That was very challenging. We had the fight team from 300 on that film. That was very intricate sword work. David Leitch was the stunt coordinator and second unit director.

AX: So you gave Conan a hard time?

LANG: Beating his ass for hours.

AX: Had you done sword work as part of stage combat before?

LANG: Oh, I was fighting for years. Sure.

LANG: TERRA NOVA is going to be a real fun ride.