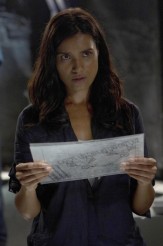 A nonsensical disease breaks out in some remote part of the colony, but never fear it hates colds 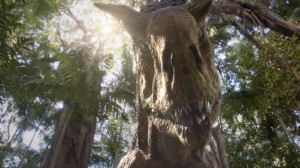 I really thought the dinosaurs in the pilot episode of TERRA NOVA were pretty good, well, as long as they didn’t move and just sat there looking big and dumb, but these last two episodes, wow, the special effects have gone from SyFy Channel quality to a notch above Ray Harryhausen.

Much like the special effects, the storylines in TERRA NOVA have taken a nose dive as well. I don’t get it. You have an entire new (old?) world around to explore or bring to life. Or examine the mysteries of this place or focus on the creatures or the environments or even coping with this strange new (old?) world. But instead we are being force-fed the Shannon family and all of their boring, clichéd subplots.

There is also the bubbling of mythology about Taylor (Stephen Lang), the Sixers, the writings on the stones, the possible connection to the past and future and how each fate is intertwined and more. Focus on this. Focus on this much more interesting aspect of the show and not at all about whether Josh Shannon gets his rocks off with a moonshine-making teen but longs for his girlfriend stuck in the future.

“What Remains” didn’t do much to further any mythology aspects of the show except for give some additional background about the characters. Now, if this was LOST, it would great because it would be actually interesting and we’d see it. But on TERRA NOVA, they have to create some super virus that somehow attaches to your DNA and changes it so that you forget the past 20 years of your life. And then we get some historical information.

So wait … some dude wants to cover his tracks for some nonsensical reason. So he creates a virus that swipes your memory by attaching to your DNA and eventually makes you catatonic. But, this super duper über virus that he created, doesn’t like the common cold? What is this, WAR OF THE WORLDS? Really, the common cold solves some DNA-centric viral riddle that incapacitated supposedly some of the greatest minds of this generation? 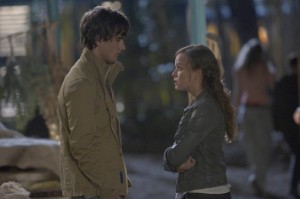 So we couldn’t come up with a prehistoric disease that cripples the characters because no humans were alive back then? So we had to have a futuristic disease do the job? Again, use what the show is based on. Nonsensical viruses, CGI birds flying about and clichés don’t further this show that’s already struggling with force-feeding us family-centric plotlines that are prehistorically bad (yes, that’s a very bad pun).

Some commentary/observations from “What Remains:”