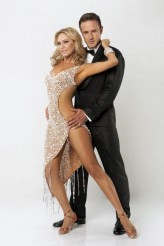 Ricki and J.R. solidify their dominance in this competition while Carson Kressley falters

It’s movie theme night on DANCING WITH THE STARS and everyone hammed it up for the ballroom. The problem was, however, most fell short of the judges’ expectations, others – Ricki Lake and Derek Hough – wowed all three critics.

There were no DWTS limits to the costumes, the scenery, even the stunts performed in honoring classic scores from MISSION IMPOSSIBLE, RAIDERS OF THE LOST ARK, PIRATES OF THE CARRIBEAN, FLASH GORDAN, TOY STORY, SUPERMAN, PSYCHO, ROCKY and THE PINK PANTHER. I had to name them all to be fair since all are outstanding movie accompaniment.

Although, yes, Lake and Hough did it again for the third week – topped the leader board – it was more shocking to see what happened to Chynna Phillips when she all but choked during her Tango. She completely lost track of the dance causing her to slip from her meteoric status to mediocre. Hope Solo, Rob Kardashian and David Arquette comfortably stayed in the middle of the pack while Nancy Grace, Carson Kressley and Chaz Bono – who was for the first time not the lowest scorer of the night, sorry, Kressley – wallowed at the bottom of the leader board. The big question is…can the fans bail Bono out from near the bottom of the DWTS barrel again?

Rob Kardashian (reality star) and his partner Cheryl Burke
He is actually starting to exude quite a bit of charisma. Len Goodman was so-so on his performance though, saying he didn’t mind it. Bruno Tonioli thought Kardashian needed to believe in himself more. Carrie Ann Inaba just liked the way he moved throughout his Paso Doble.
Inaba – 8, Goodman – 8, Tonioli – 8, Harland – 8

Chynna Phillips (actress) and her partner Tony Dovolani
Chynna, Chynna, Chynna…what happened? Goodman pointed out the obvious saying she just lost it during her Tango. Tonioli realized she just couldn’t catch up. Inaba felt bad for Phillips, saying that at least she kept up her composure.
Inaba – 7, Goodman – 7, Tonioli – 7, Harland – 7

Nancy Grace (TV host) and her partner Tristan Macmanus
Well, this was at least her most exciting dance. Tonioli wanted her to become a ball breaker on the dance floor. Goodman called her dancing “competent”. Inaba complimented her on her Paso Doble technique.
Inaba – 7, Goodman – 7, Tonioli – 7, Harland – 7

David Arquette (actor) and his partner Kym Johnson
It was very cool to watch. He looked like he was in his comfort zone. Although, Goodman bashed his Paso Doble saying it was mostly “temple of doom” for him, Tonioli loved the way Arquette cracked his whip. Inaba, too, thought David saved the day!
Inaba – 8, Goodman – 7, Tonioli – 8, Harland – 8

Hope Solo (Soccer Olympian) and her partner Maksim Chemerkovskiy
She was cute. She was fun. Bravo, finally! Again, Goodman was less impressed and more angered about her lack of commitment to DWTS. Tonioli thought her Foxtrot was lovely. Inaba said she was smiling the whole way through.
Inaba – 8, Goodman – 8, Tonioli – 8, Harland – 8

Carson Kressley (fashionista/TV host) and his partner Anna Trebunskaya
He looked like he was getting dizzy while spinning. Goodman used the analogy – “it’s like childbirth…terrible while it’s happening, a joy when it’s over.” Tonioli called Kressley the gay blade. Inaba said the Viennese Waltz was his most butch performance.
Inaba – 7, Goodman – 6, Tonioli – 7, Harland – 7

J.R. Martinez (U.S. veteran/actor) and his partner Karina Smirnoff
So much is brought to each and every dance he performs. Goodman called his Foxtrot the best male dance of the night. Tonioli said he had great dance ability. Inaba was a little disappointed, saying she thought it was just “ok”.
Inaba – 8, Goodman – 9, Tonioli – 9, Harland – 9

Ricki Lake (TV host/actress) and her partner Derek Hough
She was so stressed about learning the dance. But damn! She had it all worked out on the dance floor! Goodman simplified his critique, saying that she always delivers. Inaba stated that her Tango was “brilliance in the ballroom”. Tonioli thought her performance was “block buster caliber”.
Inaba – 10, Goodman – 9, Tonioli – 10, Harland – 9

Who will go home? Again, it all depends on the celebs’ popularity more than anything else does. Does Kressley have a larger following than Grace? Not sure. What about Bono? Can he keep defying the odds and making it through. And then there’s Phillips who all but bombed this week and dropped to bottom level status. Does she have the fans’ support? It’s a four-person race…Kressley, Bono, Grace and Phillips, one will most likely have danced his/her last dance. Stay tuned.