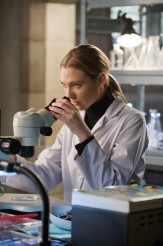 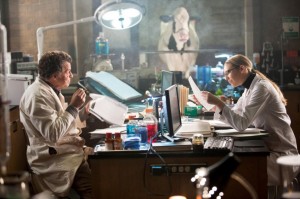 “Stowaway” was certainly a bi-polar episode of FRINGE.

On one hand we had the invasion of William Bell into the body of Olivia (Anna Torv), where we had epic reactions from Peter (Joshua Jackson), who of course is in love with her and in a relationship, and a number of buddy comedy moments with Walter (John Noble).

On the other hand, we had the very sad story of Dana Grey (Paula Malcolmson) – a woman that lost her two children and husband in a home invasion disaster. The odd thing is that Grey died as well that night, but for some reason came back. She also now can’t die, but she so desperately has nothing to live for and so desperately wants to die she hooks up with a number of suicidal people in an effort to stowaway on their souls in order to get to heaven.

The overall story was more of a typical “monster of the week” or “science fiction story of the week” where the crew tries to figure out just what the hell is going on. As always, FRINGE gives us the swerve that something is happening more nefarious – that she’s stealing their souls – but actually she was trying to jump on the heaven highway. It turns out, maybe fate, was keeping her around in order to save a bunch of people on a train that was about to get bombed by some crazy dude … at least that’s one theory that the Oliva-Bell combo came up with. Regardless, she drops dead after the blast … so is there a greater power? And if so, what does that mean for the two universes, if anything?

Meanwhile, I thought the moments with Torv acting like Leonard Nimoy (who has been William Bell throughout the series although that might change if they find a new body to inhabit) were amusing as first, the more she did it the more it annoyed me. She wasn’t necessarily doing Nimoy as Bell, she was doing Nimoy as Spock from STAR TREK, complete with the trademark raised eyebrow again and again. Yeah, it was cute at first but by the end of the episode I didn’t want any more of it.

It will be interesting to see where they go with this. It seems there is some issue with the Olivia-Bell combo and Olivia may be in distress, but with another episode in the alternate universe coming up, I guess this plotline will have to wait for the time being. And just who will be the new William Bell (and a clever way to keep the character given Nimoy is retired)? It could be a big role for someone out there … I’m anxious to find out.