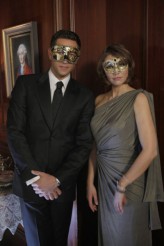 Valentine’s Day comes a week late, but the seeds for the rest of this season’s mythological arc are set into motion 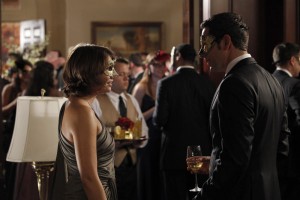 First off, it’s nice that CHUCK hasn’t completely abandoned the Alexei Volkoff (Timothy Dalton) Big Bad storyline that wrapped up with “The Push Mix” a few weeks ago. Given there is still half a season to go, to send off Volkoff to prison without a fight (or some other kind of twist) would be unfair to say the least.

With “Vs. The Masquerade,” we’re introduced to a man named Boris (David Lee) who is killing all of Volkoff’s former lieutenant’s in an attempt to find “the key.” This is something very important to the Volkoff organization, though what it is, is still to be determined.

There’s one more person on the hit list for Boris – a woman named Vivian (Lauren Cohan) who turns out to be Volkoff’s daughter. She thought her father was a rich oil baron, but that’s not the case. She’s a Volkoff.

Hence, the team is sent in to save her and capture Boris. Vivian doesn’t have a clue as to what “the key” could be, but by episode’s end, she figures out it has something to do with her necklace. When she places the necklace on an old horse figurine of hers, it reveals some kind of “footage.” Or maybe it’s an earlier version of the Intersect? Or maybe it brainwashes her into being evil.

Meanwhile, Casey (Adam Baldwin) is being lured away from his core team by someone else within the CIA who are setting up a top secret project at Castle. He doesn’t want to leave his team, but the notion of being a valuable asset to the organization could prove to be too hard to pass up.

“Vs. The Masquerade” is filled with great moments. The opening alone is worth it, which features Morgan (Joshua Gomez) and Alex (Mekenna Melvin) having a special Valentine’s Day moment, as well as Chuck (Zachary Levi) and Sarah (Yvonne Strahovski). This includes Sarah dressed in sexy red lingerie and angel wings. Very hot!

The team also crashes an EYES WIDE SHUT-type party, and there’s some great humor to mined from there. Sarah gets to be bad ass as they escape the baddies from the party with guns a blazin’ and there’s even a horse chase at the end of the episode that features some very cool Chuck-fu.

Morgan and Chuck also realize it’s time for them to part as roommates and it leads to some pretty funny STAR WARS references.

With the show spending the previous two weeks with what were essentially stand-alones, it was only time before the seeds of the remainder of the season were put into place. Now we know Vivian will be playing a major part in the coming weeks and Casey’s loyalty may be shifted to a new team.

The strangest part of this episode, was not even the episode itself, but the curious decision to air the Valentine’s Day episode – one week after Valentine’s Day.

I know CHUCK has an ongoing mythology arc, and last week’s “Vs. The Cat Squad” was awesome, but flip-flopping these two episodes wouldn’t have changed much in the ways of continuity.

Oh well, at least we got to see Sarah in her Valentine’s Day lingerie one way or another.