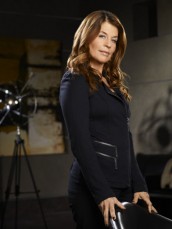 One of the things that has made CHUCK such a great series throughout its four season run, is the quality of guest actors that have popped up for one-shots and multi-arcs.

From Chevy Chase to Brandon Routh, CHUCK is a show that gives cool actors (whose careers whole cooled a bit) a chance to show a different side within a quirky TV show that feels like an expansive action movie every week.

And this year, adding to that great guest star run, we have Linda Hamilton as Mom Bartowski (and double, double spy) working for the Russian Big Bad Alexei Volkoff played by former Bond Timothy Dalton.

Every episode that these two actors appear in, they immediately elevate CHUCK to a whole level of geekdom. They’re so good that hopefully the CHUCK exposure will remind people why we fell in love with them to begin with and NBC will offer each actor a whole new series to spearhead.

“Vs. The Gobbler,” not surprising, is another Volkoff-centric episode with Sarah (Yvonne Strahovski) now deep undercover (and her hair jet black). Her undercover missions have finally got her to the high level of the Volkoff operation where she has to prove herself to Volkoff. Test 1, she has to break out Volkoff’s former henchman known as the Gobbler (because he eats people). Test 2, she needs to kill John Casey (Adam Baldwin) with Chuck (Zachary Levi) watching.

Of course we all know it’s going to be faked in some way, but Casey does get severely injured during his fall from a building (his idea) – so he’ll be laid up for at least a couple of weeks.

Meanwhile, Sarah has to learn the concept of “distance” in order to handle working the Volkoff organization as a double, double spy. Mom Bartowski is there to help too.

There were two other B-stories this episode. One, follows the continual evolution of Morgan (Joshua Gomez) and his relationship with Casey’s daughter. It’s clear he’s falling for her and the moment involving a pristine BACK TO THE FUTURE T-shirt, is again, another geek-tastic sequence.

The other subplot involved Awesome (Ryan McPartlin) and Ellie (Sarah Lancaster) trying to come up with a satisfying baby name (the pay-off involves IKEA).

Every element of this episode tracks perfectly and the double mission is also something CHUCK handles well. There’s enough comedy and action to go around and we get a whole other layer and level to the Chuck and Sarah relationship.

“Vs. The Gobbler” is another stand-out episode in a season that keeps getting bigger and better. Next week seems like the whole Volkoff story will be getting wrapped up in some way – but with a whole other half of the season to go, so who knows where the creators and writers are going to take us next.