Home » Blu-ray Review: BACK TO THE FUTURE – 25TH ANNIVERSARY TRILOGY 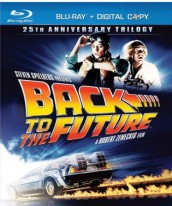 Blu-ray Review: BACK TO THE FUTURE – 25TH ANNIVERSARY TRILOGY

All three films presented in a brand new pristine transfer, hours of bonus material footage of Eric Stoltz as Marty McFly and digital copies of all three films. The definitive edition indeed!

It’s hard to believe it was only five years ago when Universal released all three BACK TO THE FUTURE films remastered for DVD with loads of bonus features and retrospectives.

Now, it’s time for a Blu-ray reissue with BACK TO THE FUTURE: 25th ANNIVERSARY TRILOGY and if you thought the first set was great, this one blows it out of the water.

Just about everything you could possibly want from a BACK TO THE FUTURE collection is here, including, the long-rumored, but never seen footage of Eric Stoltz as Marty McFly (before he was replaced by Michael J. Fox) and the footage from the now-defunct Universal Studios interactive ride.

To think that it’s been 25 years since the original BACK TO THE FUTURE was released is pretty shocking. What’s even more astonishing is how well the film (and its two subsequent sequels released in 1989 and 1990 respectively) have stood the test of time without feeling dated or small in comparison to the filmmaking spectacles that can be accomplished now with CGI overkill (and unnecessary 3-D).

That’s what time travel can afford filmmakers and director Robert Zemeckis who also wrote the script with partner Bob Gale provided a template that has gone unmatched since. The duo were always interested in intricately plotted thrill rides (witness the comedic USED CARS and 1941), but with BACK TO THE FUTURE everything just clicked perfectly.

The story follows 1985 teen Marty Mcfly (Fox) whose home life isn’t the best (his parents didn’t amount to much and are very unhappy) while finding some thrill hanging out with his scientist friend Doc Brown (Christopher Lloyd). Somehow, Doc Brown has perfected time travel (using a souped up Delorean) and through a series of circumstances, McFly ends up back in time in 1955. Here he meets a young Brown (who eventually decides to help him get back to 1985), while also running into the teenage versions of his mom Lorraine (Lea Thompson) and dad George (Crispin Glover).

The problem in running into them is that he sees what a wimp his dad is and what a guy chaser his mom is – eventually resulting in his mom falling for him! In order to remedy the danger of him and his brothers and sisters from being wiped from existence, Marty has to make sure his mom and dad fall in love at the school dance (like they did before he went back in time) or cease to exist completely.

It’s an amazingly well-plotted film, with excellent acting across the board, great character humor, an amazing heart and impressive (but not detractive) special effects).

And it’s a movie that is still enjoyable viewing after viewing – hard to say about many 1980s movies aimed at kids.

In 1989 and 1990, Zemeckis reassembled most of the team to shoot and release back-to-back sequels. What could have destroyed the franchise, actually enhanced it. Yes, there are detractors of the sequels, but watch them again, and they’re satisfying sequels in many ways.

BACK TO THE FUTURE PART II follows Marty and his girlfriend Jennifer (now played by Elizabeth Shue) to the future of 2015 where there’s trouble with his kids. Going to the future also sends a ripple effect when villain Biff Tannen (Thomas F. Wilson) uses the Delorean to go back in time to give his younger self a Sports Almanac that tells the scores of all future games (thereby making him a mega-millionare).

The ripple effect is devastating when Doc Brown and Marty return to Hill Valley in 1985 to find everything has changed – Biff has turned the small town into a gambling paradise.

Now, they have to go back to 1955 and stop young Biff from gaining possession of the Almanac.

The clever trick in PART II is how Zemeckis goes back to the 1955 of the original film and lets the audience view things and events from different perspectives. It painstakingly recreates that atmosphere and mood – and even with five years in between the two movies, the actors themselves still remained eternally youthful.

PART II ended on a cliffhanger where Doc Brown was sent back to the Old West circa 1885. He now has to find a way back to the even distant past, while stranded in 1955.

In BACK TO THE FUTURE PART III, Marty ends up back in the Old West, and this time he needs to save Doc Brown from himself (he’s fallen in love with a schoolteacher played by Mary Steenburgen). The expected time trickery is on display as Zemeckis pays homage to classic John Ford and Clint Eastwood westerns. It very cool stuff, and in some ways a much better film than PART II, only by the virtue that it’s more consistent and a far more original exploration of time travel with the Old West backdrop.

The High-Def digital transfers of all three films blow any previous video incarnations out of the water. All three are beautifully restored – particularly the 1985 original that has never looked better. It’s crisp and pristine, the colors even more vibrant. Whenever I hear about a film coming out on Blu-ray that’s been restored, usually I can’t tell the different from previous DVD releases. Here, you can tell the difference. This is the standard for which all future Blu-ray restorations should hold up as the Holy Grail.

Spread out over the three discs is a six-part retrospective called TALES FROM THE FUTURE. It’s exhaustive as it tracks the inception of the idea all the way to the completion of PART III and the various spin-offs thereof (the animation series and the Universal Studios ride).

While some of this material has been covered in the previous archival retrospectives, the big coup here is that Eric Stoltz footage. We’ve all heard the stories of how Stoltz shot for five weeks on the movie and then was let go, only to be replaced by Fox. Yet even the previous DVD release failed to show any footage of it. While we don’t get to hear Stoltz as Marty, we do see him in three iconic moments from BACK TO THE FUTURE. It’s hard to tell what kind of energy he brought to the proceedings, but it’s clear Zemeckis’ instincts were correct in lobbying for Fox. Fox is more high energy, Stoltz more of an introspective actor, which is why his incarnation of McFly might have been a bit too serious in context to the crazy proceedings around him. Fox is a great reactor, and does it with such natural aplomb, he was the secret ingredient to the FUTURE franchise that made it all come together.

Other new features include the storyboards from the never before seen nuclear test site ending conceived for the film, some old age make-up tests on Thompson, Wilson and Glover and endless photo galleries.

Commentaries are also in abundance, while music videos of Huey Lewis and the News performing “The Power of Love” and ZZ Top performing “Doubleback” are also part of the set.

Deleted scenes are provided with optional commentary from Bob Gale and there’s even a text feature FAQ where Zemeckis explains some of the logic and thinking behind the movie’s time travel conceits (and potential plot holes).

There are also a bunch of the archival featurettes from the last DVD release.

So what else could the set offer? How about digital copies of all three films?

I’m not one to nudge people to go out and re-buy a film set they already own from the last release five years ago, but if you’re a fan of the BACK TO THE FUTURE films, you’ll want this set. It’s the definitive version, and it has everything a BACK TO THE FUTURE fan could want. Aside from reassembling an alternate version of FUTURE with all the Stoltz version, there shouldn’t be a need to revisit the trilogy again unless a 30-year anniversary can up the ante considerably.

For me, I’m a happy camper – most importantly in respect to the original film. I loved BACK TO THE FUTURE when I first saw it in 1985, and my love for the film has not waned all these years later. It’s a time capsule of the innocence of the 1950s, and in some ways, the innocence of the 1980s. I’m not sure if a remake would be beneficial, nor a third sequel. As a time capsule of great moviemaking, this is it. No other franchise has delivered three great and consistent films (also helmed by the same filmmaker) except for FUTURE and this 25th ANNIVERSARY TRILOGY edition cements this franchises reputation with the ultimate package.