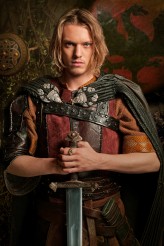 Things are moving fast for King Arthur and his Kingdom

I’m still thoroughly enjoying one of the more original series on TV, with the second episode of CAMELOT entitled “The Sword and the Crown.” This series moves incredibly fast, in fact a lot faster than most period television. I don’t know if it’s due to budget or number of episodes ordered, but this show is MOVING.

Arthur (Jamie Campbell Bower) just found out in the pilot that he was the only make heir to the King who had just been poisoned by his daughter Morgan (Eva Green). He was whisked away to Camelot by Merlin (Joseph Fiennes) and placed on a throne in direct opposition to his half sister and her puppet/ lover King Lot (James Purefoy). Lot kills off Arthur’s ‘mother’ at least the only mother he has ever known, in retaliation for Arthur slaying his son, and off we went to war.

Now with the second episode not only do we see Arthur crowned King of all of Britannia, but we also see a new interpretation of the pulling of the sword from the stone, and Guinevere (Tasmin Egerton) has already shown up. King Lot also gets killed off by the man who was a father to Arthur (Sean Pertwee) who dies in the process.

So now do you see why I say this series moves fast?! It’s only taken two episodes for Arthur to gain his throne, his crown, and meet the woman he is destined to make his queen. That’s a lot in such a short span of time, but I prefer this sort of pacing to the long laborious pacing of some of the other telling of the Arthurian Legend.

One thing that is handled particularly well in this series is the weaving of myth and reality to make it a sort of believable fiction. Arthurian legend has a large share of magic and mysticism to it, but this series really manages to take myth and figure out a way to make it plausible. The idea of having the sword stuck at the top of a waterfall made sense, as to why no one could procure it. It is a nice twist to the Disney image of the sword sticking out of an anvil in the middle of a town.

Merlin and Morgan continue to intrigue me as characters. The magic used on the show is more earth based magic, and old magic using blood rites. It’s not the hocus-pocus CGI magic that many of the shows dealing with Arthurian Legend fall back on, and so once again it make the story more believable and more accessible to audiences.

The acting is still top-notch, and this is the kind of program we should have more of on TV. Well-scripted, acted, and produced television that is interesting and engaging and exciting to watch. I hope CAMELOT sticks around for a while, as this and SPARTACUS (also on STARZ) are two of my favorite shows on television.