An up and down series ends with a strong finale 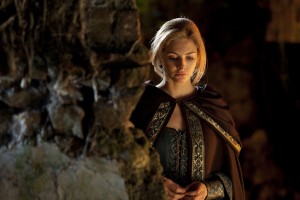 And with that we, the audience, have reached the finale of CAMELOT season one. It has been an interesting season in both good and bad ways. The first few episodes of the series seemed to set a pace that was breakneck and moving forward with a strong surety of the direction the season would end. Then unfortunately somewhere in the middle, the season seemed to lose direction and to start meandering all over the map. The stories went from being dynamic to being kind of washed out and lacking the fire and direction of the first few.

Everything basically comes to a head in “Reckoning”, and several main cast members die in the finale, some are characters that are not a surprise that they met their end, and then there are others who I hated to see go.

The first death of a major character that shocked me a bit came at the hands of Morgan (Eva Green), who finally decided to dispose of Lady Igrain (Claire Forlani) once and for all. After the usual monologue about how she is wronged, Morgan sticks Igrain with a dagger and leaves her to bleed out slowly. I actually got upset by this, because I liked the character, and her confession of saving Morgan’s life makes her even more of a hero and Morgan even more of an unrepentant bitch.

The other major heroic death was to be expected. After all of the drama of last episode between King Arthur (Jamie Campbell Bower), Lady Guinevere (Tasmin Egerton), and her husband Leontes (Phillip Winchester) it didn’t take a genius to figure out that Leontes would have to die for the two star-crossed lovers to be together. Of course Leontes was given a heroic death, saving the life of the man who shagged his wife, and the passing of her care to Arthur with his dying breath. Again, like I said not a big surprise, but I am sorry that Phillip Winchester is not going to be on the series; since I’m rather fond of his character.

Merlin (Joseph Fiennes) spends a good portion of the episode in chains or the stocks once again compliments of Morgan, but once freed he has one of the BEST scenes of the series to date with the passing of Lady Igraine. The death scene was so beautifully acted by both actors, that I found myself torn between which should live and which should die; since Merlin was willing to expend his own energies to bring her back.

Nun Sybil (Sinead Cusack) finally got her just desserts in this episode and I had not even one iota of sadness when he head left her shoulders in a bloody arc to fall into an unmarked grave. I also liked the fact that Merlin was there to deny her any kind of peace of mind as she dies by telling her there is no God.

Lots of things are also laid in the finale. We see the creation of the infamous Round Table, which has a disturbing twist in this version being built with planks covered with Leontes blood so that he always has a place at the table. Charming. Who would want to ever eat off of that table? Plus, that last few minutes saw the conception of Morgan and Arthur’s son Mordred, since Morgan shagged the King senseless disguised as Guinevere.

So what do we take away from CAMELOT? The production value of the series is spectacular. The writing was a little to up and down for such a short season, and the drive of the series seemed to disappear and reappear through the ten episode run. Will we see more CAMELOT? The ratings started strong but then took some steep drops, so it’s kind of unlikely that the series will return. If it does, hopefully it will be a bit tighter and better paced the second time around.