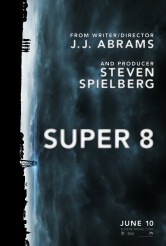 J.J. Abrams makes what is probably the most Spielbergian movie so far written and directed by someone who isn’t Steven Spielberg

SUPER 8 is so uncannily like the kind of movies Steven Spielberg used to make in the late ‘70s and ‘80s that it’s easy to suppose he made this one too – except we’re now in 2011, and Spielberg hasn’t made a movie like this in a good long while. To be fair, Spielberg indeed is a producer here and SUPER 8 comes sailing the night sky of his Amblin logo (not all Spielberg-produced films have this honor), but it is in fact written and directed by J.J. Abrams.

There is an actual Super 8-millimeter film connection between Spielberg and Abrams – when Abrams was still a young filmmaker himself, his own Super 8 work impressed Spielberg sufficiently to have the experienced director enlist the newcomer to restore his own youthful Super 8 work. However, the film is about something else entirely.

This SUPER 8 is set in 1979. A prologue introduces us to 14-year-old Joe Lamb (Joel Courtney), whose mother has just died in a factory accident and whose father Jackson (Kyle Chandler) is a sheriff’s deputy in the small town of Lillian, Ohio. Flash forward four months. Joe and his same-age friends, led by determined director/producer/writer Charles (Riley Griffiths) are making their own Super 8 zombie movie, intended for submission to a film festival. Some drama is added by the casting of schoolmate Alice (Elle Fanning), partly because both Joe and Charles like her, partly because she surprises everybody by actually being able to act (unlike the rest of her zombie movie colleagues) and partly because Alice’s alcoholic dad Louis (Ron Eldard) seems to be connected in some way to the fatal accident that killed Joe’s mom.

This would be enough on its own for a small, smart, affecting movie about adolescence – but not enough for the great Spielbergian wallop to come. For those who have remained unspoiled about the big plot twist, let’s just say this. The kids are filming late at night and happen to be rolling when a spectacular train crash occurs. When studied later, the footage shows something even more startling than the crash occurring in the aftermath. And then …

SUPER 8 is pretty much awash in charm. The kids are great, with Courtney, Fanning and Griffiths all standouts and Ryan Lee as a young pyromaniac who seems to truly have stepped out of 1979. Abrams’ affection for everything he is doing here buoys the entire movie, both the real genre scenes and the splendidly earnest teen moviemakers at work. There’s a sense of great joy here, and there’s something very affecting about seeing how what have now become filmmaking tropes can still work just fine when they are perfectly calibrated.

Some aspects of the movie don’t entirely work. There’s a crucial special effect that looks a little more like something from the ‘70s than what can be done now (it would be fine if it was part of the zombie movie, but it’s in SUPER 8’s “real” world). Some female filmgoers may not be overjoyed with a movie that returns to ‘70s-era marginalization of the entire gender, though nobody can argue with period authenticity on this score.

There’s also the issue that, in recreating the Spielberg tone with such pitch-perfection, Abrams inevitably creates a sense that we’ve seen this before. However, for most of us, SUPER 8 reminds us why we were so happy to see this kind of thing in the first place, and makes us happy to see it again.