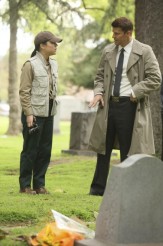 An excellent episode that is genuinely moving, has some great humor and handles a crucial matter with finesse 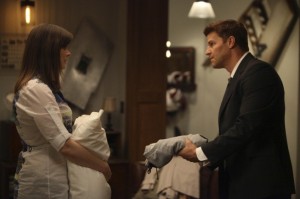 BONES has been doing the will they/won’t they dance for the entirety of its six-season run. It’s a measure of the skill of “A Hole in the Heart” that the matter is finally addressed, but quietly, so that our emotions and sense of suspense are both fully engaged elsewhere at the time.

Booth (David Boreanaz) is still tracking down his old Army sniper comrade-turned-vigilante Jake Brodsky (Arnold Vosloo). At the same time, Brennan (Emily Deschanel) and lab assistant Vincent Nigel-Murray (Ryan Cartwright) are like a couple of school kids about a paper they’re going to present, outlining who, or what, would be the winner in an arm wrestling contest between a T-Rex and a human being. Hodgins (T.J. Thyne), excited by Nigel-Murray’s human-sized T-Rex skeleton, stages an arm-wrestling match – and determines that humanity wins.

However, tragedy strikes when Booth hands his cell phone to Nigel-Murray (so that Booth can get a trace on the line) and Brodsky uses the opportunity to shoot the cell phone’s holder, assuming it to be Booth. Nigel-Murray, dying on the lab floor, plaintively begs Brennan not to make him leave and Brennan assures him he is welcome to stay as long as he likes. Nigel-Murray dies and everyone is devastated, particularly Brennan.

Because Brodsky seems to be gunning for not only Booth but everyone on Booth’s “team,” Booth asks Brennan to spend the night at his apartment. She takes the couch, but in the middle of the night, she comes into Booth’s bedroom, still anguished by Nigel-Murray’s death. Booth explains that Nigel-Murray didn’t think Brennan was trying to make him leave – that he was talking to God, or the universe. Brennan lies down with Booth and he holds her.

In the morning, with some help from the lab team, Booth tracks Brodsky to a shipyard, where the two men stalk one another. Brennan tells Angela (Michaela Conlin) that she got into bed with Booth. When Angela asks what happened, Brennan smiles and doesn’t look directly at Angela. Booth is able to wound Brodsky without killing him and takes him into custody. They both think they’re good guys, Booth and Brodsky agree. Booth tells his prisoner, “The difference is, I’m right.” Booth and the team at the lab say their farewells to Nigel-Murray’s coffin, which is being shipped back to his mother in England. When it is revealed that Nigel-Murray’s favorite song was, “Da Lime in Da Coconut,” everyone sings it as they load the pine box into the hearse.

This is an episode where the actors and writers Carla Kettner & Karyn Usher do some of their best work, abetted by director Alex Chapple. The stalking sequences, especially where our regulars feel vulnerable and exposed to Brodsky’s unseen rifle scope, are done with the kind of intensity usually reserved for non-serialized storytelling. It’s possible that the filmmakers’ knowledge of Nigel-Murray’s impending death helped give them a sense of bigger stakes, because that sense certainly is pervasive throughout the episode.

Likewise, the humor really scores here. Unlike some other far-fetched set-ups for jokes that BONES has sometimes employed, the notion of testing dinosaur strength against humans is exactly the sort of thing that really would appeal to Brennan and Hodgins. The screwy arm-wrestling match is both totally in character and completely hilarious and the final song is exactly the kind of healing laughter through tears called for by the denouement.

And there are tears. Vincent Nigel-Murray has been a good, enjoyable character and his desire to hold on to life is pitched perfectly to be truly affecting. Happily, we do not have to cry for actor Cartwright, who is a regular on Syfy’s upcoming new series ALPHAS.

Finally, there is the graceful way the episode works in the coming together of Brennan and Booth. The way has been prepared for this by Brennan stating herself that she will need to be more vulnerable for it to work, and the circumstances not only allow Booth to keep his dignity after all those “I’ll never fall in love again”-type statements – it is both his instinct and his moral imperative to make Brennan feel less alone in this situation – but leave some key details to the individual viewer’s imagination, ensuring that no one can complain that they got it wrong. Best of all is the low-key way Brennan confirms what has happened (and Angela’s temporary banishment of Hodgins so that the whole story can be told).

Not all BONES episodes can, or even should, be like “The Hole in the Heart.” The series isn’t set up to sustain this kind of intensity week to week. However, it’s great to see what a true peak episode looks like on this show.