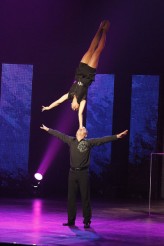 They weren’t kidding when they prefaced AMERICA’S GOT TALENT tonight with “Now it gets serious.”

No kidding around, over 100 acts were summoned to Vegas and then they were categorized by the judges in three unique areas. The first 12 acts immediately picked were told they didn’t need to audition again. They were going straight to Hollywood for the next round.

Then came the judges’ favorites – about 50 performers – who were asked to audition again that night in front of only Piers Morgan, Howie Mandel and Sharon Osbourne, no audience. Not even Nick Cannon was allowed his comic jibes. This is serious stuff. No room for funny banter this time. Thirdly named were the stand-bys who will perform the next night in hopes of filling the slots the favorites who couldn’t cut it left vacant. The stand-bys will be seen Wednesday on AGT.

So, tonight on AGT it was all about the judges’ favorites. The fireball juggler, the guy who breaks boards on his head – only this time the boards didn’t break – not good, as well as the bike stunt team, the stun gun juggler and many more performed in categories based on their talent. There were singers, bands, dancers, pole dancers, comedians, animal acts, novelty acts and magicians. The time had come to show the judges they weren’t wrong in sending them through to Vegas. It’s the BIG time now, step up or step down right off the stage.

However, some crumbled. Singers Four Play, who messed up their routine, were instantly told they would be sent home. So too was Cindy Chan the operatic singer who wobbled a bit here and there in her audition. Still, others had to wait to hear the news. Two dance acts saw performers injured while rehearsing for their second audition. One of the Fatally Unique dancers spilt her lip and fractured the tip of her nose practicing her moves. Another dancer sprained her ankle while rehearsing. It was worth it for Fatally Unique in the end because the group is moving on to Hollywood. For the other dancer, sadly, it was not.

Sadly, she and her dance troupe didn’t make the cut.

It’s heartbreaking to see people who weren’t chosen to move on but heartfelt to see those that did get picked. The show is a new breed in Vegas. It was so suspenseful and so strenuous to watch, especially without Nick Cannon doing his “thing” off to the side of the stage or sometimes on the stage. It’s like it was a completely different show altogether.

Yet, twenty something acts are moving on with the dozen acts whom already moved on to Hollywood. Wednesday… who will join them? Stay tuned.