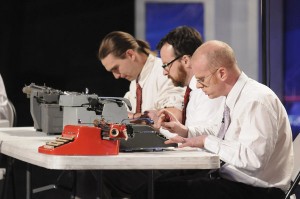 You would think New York – second only to Los Angeles – would have an overabundance of talent to showcase. Not so much. AMERICA’S GOT TALENT proved that with day one of auditions in the Big Apple. We witnessed only five acts get the go ahead to Las Vegas. Five! So many were so bad that we didn’t even get to see Piers Morgan buzz them right off the stage. You could just tell with a few brief seconds peek into their acts that they weren’t going anywhere except home!

The Triple Threat – named because they supposedly could sing, act and dance – couldn’t sing or dance and we never got to see if they could actually act because they were buzzed by all three judges Piers Morgan, Howie Mandel and Sharon Osbourne within seconds of their performance. Then there was the “speed” eater who downed an entire pumpkin pie in 70 seconds. Interesting, but not so exciting to watch. What’s his second act…a whole turkey in 60 seconds? Gobble, gobble goo!

The Boston Typewriter Orchestra was amusing to watch but, again, not so entertaining to sit through. The Parrot Wizard couldn’t get his parrot to perform, even though he was dressed in a pirate costume. A comedian, a sword swallower, a “Human Knot”, some sort of opera act and a few performance artists, I use the word “artists” loosely, didn’t make the cut either.

Those that did make it to the next level were worth sitting through all the previous rubbish. Snap Bogie, a break dancer with his own panache, magician Michael Turco who seems to reproduce woman faster than Hugh Hefner and Steven Retchless the first male pole dancer I’ve ever seen, or heard of for that matter, all were giddy about going to LV.

One of the two biggest surprises of the night came from a piano player who gives new meaning to the words “The Piano Man.” Sorry Billy, this guy actually played the entire piano. You have to see it to believe it. He played the inside and out of that thing which got him a trip to Vegas. Also surprising was Landau Eugene Murphy, Jr. who looked Reggae but sang classical. He belted out an old Frank Sinatra tune that brought the house to their feet. A definite yes for him!